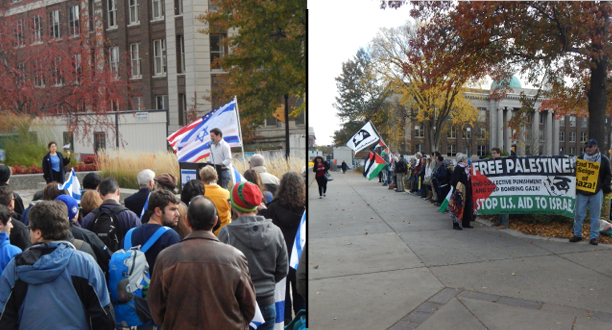 A pro-Israel peace rally that took place on the University of Minnesota-Twin Cities Campus was silently protested by approximately 50 Palestinian advocates onOctober 30.

The rally was put on by Students Supporting Israel (SSI,) Hillel, and other pro-Israel groups in response to the recent attacks by Palestinians on Israeli citizens. The counter protest, hosted by Students for Justice in Palestine (SJP,) Students for a Democratic Society (SDS,) and other pro-Palestinian groups claimed that the slew of attacks on Israelis were in response to Israeli occupation.

“It’s not that Palestinians just decided to pick up knives and stab Israelis. There is a larger problem of occupation and apartheid,” SJP representative Riam El-Khatib said, “This violence, unfortunately, is a sad result; it’s a way to express their frustrations, it’s a way to say they haven’t given up.”

The pro-Israel speakers rejected this view, spreading messages of unity and standing up against incitement. Speakers elaborated on Israel being the last home for the Jewish people and urged peace between Israelis and Palestinians. These cries for civility come after the vicious Palestinian terrorist attacks in Israel.

On El-Khatib’s comments on the attacks being the fault of Israel, UMN law professor and pro-Israel advocate Oren Gross said, “Have you ever been angry? Have you taken a knife or an axe or a gun to express that?”

“I think it says it all. This was a rally for peace. You heard speaker after speaker talk of peace and life and liberty of Jew and Arab, of Israeli and Palestinian,” Gross said, “The fact that you have people who basically deny the right to life, the right to happiness for one people, the Jews, that to me speaks volumes.”

The peace rally was attended by over 100 students, faculty, and locals. Both the rally and the protest were uninterrupted by activists from the opposing side.