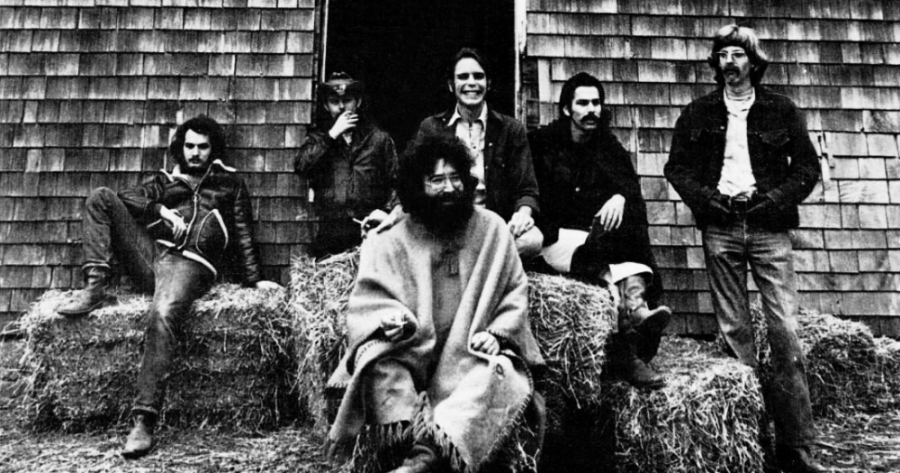 The Grateful Dead, America’s original and prolific jam band, had a long, strange trip during their 30 years on tour. From 1965 to 1995, the Dead toured almost consistently. From humble beginnings to regularly selling out stadium shows in the 80’s and 90’s, the Grateful Dead have made their way around the country, and the world.

During the Dead’s tenure, they played over 2,300 shows in 46 states and 12 countries. 16 of these shows took place in Minnesota, and one significant show took place right on campus at our very own Northrop Auditorium. Sets ending in a fist fight, kicking off a tour with six new songs, and a few concerts with local favorite Bob Dylan are all apart of the Dead’s long strange Minnesotan trip.

All Grateful Dead shows, including the ones mentioned in this article, are available to stream for free at Archive.org. We always encourage you to listen to more Grateful Dead.

The still-bluesy Dead start off their saga of Minnesota concerts with their performance at the Labor Temple on February 2, 1969. The Labor Temple, once Minneapolis’s premier psychedelic ballroom, is now the Aveda parking lot. The building is long gone, but the music and stories from that night are still with us. The Dead’s performance here starts off with a 1969 staple “Good Morning Little School Girl.” The band seems to be loose and playing well together, but some members of the crowd were not having it. Immediately following the opener, the crowd can be heard yelling at the band! The Dead’s bassist, Phil Lesh, is heard jokingly saying “What? Too loud for ya?” While Jerry Garcia, the iconic lead guitar player, retorts with  “Come on man we come all the way across the country for ya… to cold, miserable Minnesota and what do we get?… People who can’t dig it.”

Interestingly enough, after scolding the crowd, the band jumps right back into the popular “Dark Star” and absolutely lays it down for the ungrateful crowd. After a few more songs and only playing for an hour and a half, the Dead leaves the now satisfied crowd and would return to Minnesota only two months later.

The crowd at the February show must’ve invited their cooler friends to this show as the crowd can be heard absolutely loving each and every jam that the Dead performed that night. The band starts off with the energetic crowd favorite “Turn on Your Lovelight,” and they never slow down. This show is outstanding and a classic example of 60’s bluesy Dead. The show was so good that it was released commercially as Dick’s Picks Vol. 26.

The Grateful Dead’s only show at Guthrie, along with the rest of the fall 1970 tour, is barely documented as the band’s sound engineer, LSD producer, and archivist Owsley “Bear” Stanley was in jail. In fact, this show is so sparsely documented that there isn’t even a recording on the Internet Archive; all that’s left are oral accounts of those who attended the shows. Dead.net user Cactus Pete says of that night:

“About halfway through the Dead’s Set, Jerry kept looking up into the Catwalks above the stage. We had about 1000 folks outside (Guthrie only held 1295). Some kids had gotten up on the flat roof and had taken a skylight off and we’re watching the show from about 40 feet above Garcia! We had an early snow that year and they kept dropping a few flakes down onto Jerry! He kept feeling this cold wet stuff on the top of his head and about halfway through the set he says, Far-Out SNOW”

By 1971, the Grateful Dead was an extremely popular national act. This show was the opener to their fall tour, and would later prove to be a pivotal moment for the band.

This show was the first live show for longtime keyboardist Keith Godchaux. Godchaux was replacing Pigpen who, by 1971, was too sick to tour regularly. Godchaux would go on to define and influence the band’s sound as it morphed from blues to psychedelic in the 70’s.

The Dead’s second drummer, Mickey Hart, was also noticeably absent from this show. Hart dropped out of the band for the Fall 1970 tour until the mid 70’s to deal with substance abuse and family problems. This was the first show the Dead performed without him.

This show also featured the introduction of six new songs! Those songs were: Mexicali Blues, Jack Straw, Ramble on Rose, Tennessee Jed, Comes a Time, and One More Saturday Night. All six would become regulars in the Dead’s rotation. All but Mexicali Blues and Comes a Time are regularly played by the current iteration of the Grateful Dead, Dead & Company, the culmination of the various spin-off bands formed after Jerry Garcia’s death in 1995.

The show is great overall. The highlight of the first set is an absolutely smoking Cumberland Blues that features Bobby turned up nice and loud. The energy of Northrop that night is palpable through the recordings. Dead.net user Hard2Handle recalls of that night:

“Yeah, [there were] fireballs being tossed into the air behind the drum kit…  My first show without a light show, and I thought it a poor substitute. Somebody had a shopping bag full of joints rolled in American Flag papers, and passed them out. The Dead rocked pretty good.”

Hard to imagine this scene playing out in the building that currently sits across from Coffman Union.

After another two years, the Dead once again roll into the twin cities with some new material. This show was fairly standard for 1973 with equipment issues and short jams. The show is relatively unremarkable except for the rousing rendition of Beer Barrel Polka that was played in the first set.

Having just played a normal show in Minnesota a few months prior, something was bound to happen at this one. The show starts off normally, but there was reportedly an odd vibe in the air. It could have something to do with the fact that the Hell’s Angels were providing security for the Dead at the time…

At the end of the second set, during a rousing rendition of Casey Jones, a member of the audience leapt over the security barrier near the stage. They were tackled by the Hell’s Angels, and somebody immediately began throwing punches. Phil Lesh can be heard in the recording saying “Okay, asshole” three times. Jerry was a bit more sympathetic of the situation and responded by saying “Don’t beat on our audience, guys.”

Bob Weir was allegedly swinging his microphone stand at the crowd members who decided to use the situation to also rush the stage, and it’s been said that Bill Kreutzmann, the drummer, was also involved in the brawl. However, the audio evidence does not corroborate either story.

This concert was billed as a three-set act, but after one more song, the band decided to pack up and leave early.

The next time the Dead would come to the Twin Cities would be just three days after the legendary show on 5/8 at Cornell. If you’re a relatively new Grateful Dead fan, the 5/8/77 show is the place to start.

In terms of quality, this show is not far behind. The Dead were pretty consistent in 1977, and the Spring ‘77 tour is widely regarded as their best run of shows. This show was commercially released in the May 1977 box set.

All that is remarkable about this show is the playing, which is available on Archive.org.

1980’s Grateful dead is always very hit or miss. Keith Godchaux left the band in 1979, and Jerry’s health was consistently failing. The Dead collaborated with Bob Dylan a few times, but all of these shows are, frankly, hard to listen to.

In 1988, the Dead debuted the song Victim or the Crime, and in 1989 they were experimenting with new sounds – most remarkably Jerry using a MIDI guitar.

The Grateful Dead really do have something for everybody. From their bluesy early days to the intense psychedelic sound of the 70’s, and finally to their slump in the 80’s, the Dead was one of America’s most influential acts up until Jerry Garcia’s death in 1995. The Grateful Dead culture inspired endless waves of tie-dye and even a music festival, LOCKN’, which aims to preserve the feel of early lot scenes.