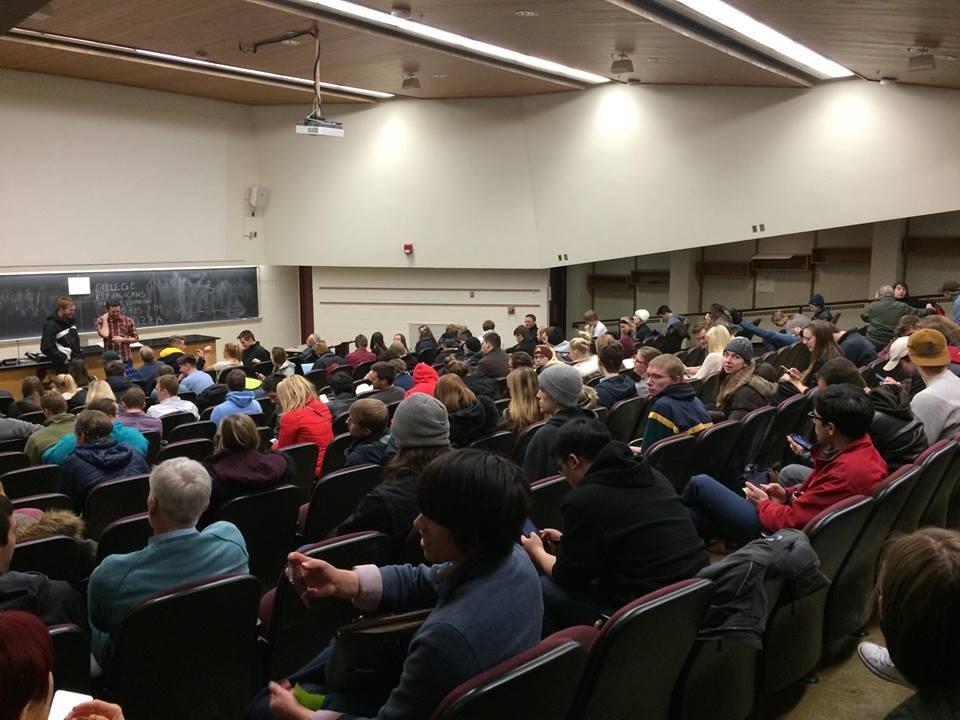 Editor’s note: This article was updated at Tuesday at 11:56 p.m. to includevote counts provided via SD 60 Chair Kayla Fossen.

Republicans flooded into Anderson Hall Tuesday night, overwhelming caucus organizers; the caucus failed to start until 8:47 p.m., well past the 8:00 p.m. deadline for conclusion of the straw polls.

The line wrapped down two flights of stairs, outside of Anderson, and across the West Bank of the UMN campus to the Carlson School of Management.

This caucus, which saw only 50 people attend in 2012 according to Senate District 60 Chair Kayla Fossen, filled several lecture halls with hundreds of people. The state Republican Party granted a time extension due to the massive and unexpected turnout.

Senator Marco Rubio was the runaway victor in the caucus with 619 votes, while none of the other four candidates remaining in the GOP primary received more than 100 votes.Dr. Ben Carson came dead last with only 19 votes.

“I arrived to Anderson very early, around 6:25,” said Hannah Rosencrantz caucus attendee and UMN College Republican, “And there was already a line up the stairs. I waited in line for approximately 40 minutes.”

Caucuses are supposed to begin at 7 p.m., with straw polls required to close at 8 p.m. After the deadline was extended by the state Republican Party, the caucus failed to show a semblance of starting until 8:47 p.m. Even as the process finally started, voters were still checking in.

“I think the late start was necessary,” said caucus attendee and UMN College Republican Madison Faupel, “Many people wouldn’t have been able to participate if they didn’t give the extension, and I think that would have discouraged young voters from participating in future caucuses.”

With the low turnout in previous years, a large number of precincts are condensed down to one location.

“They were very unprepared for this turnout,” said Faupel, “I don’t think they should have had 12 precincts in the same building.”

Anderson Hall had several lecture halls filled to capacity as GOP turnout kept climbing. The caucus was divided among classrooms, at one point shifting whole precincts out of one room where they were already seated and into another.

“I think the organization was lacking, most likely because they did not expect such a massive turnout,” said Rosencrantz, “The spaces themselves are completely maxed out in terms of capacity.”