Beijing Cracks Down on Pro-Democratic Protesters in Hong Kong 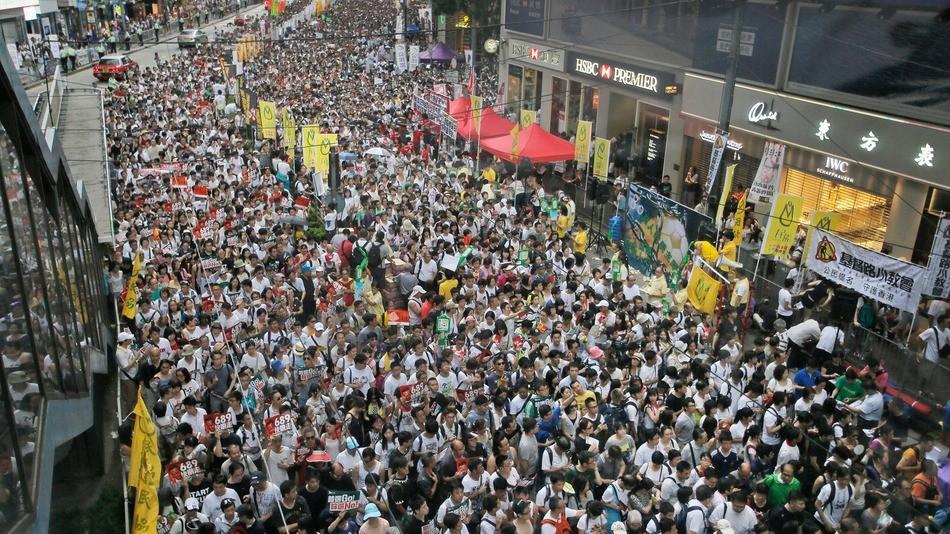 Riots have erupted in Hong Kong and, while they have remained largely peaceful thus far, anti-riot police are beginning to change the face of the demonstration. The pro-democracy riots have erupted after the Chinese government reneged on their promise to grant Hong Kong a full democracy in 2017.

While China is governed by a Communist regime, Hong Kong has remained a much more liberal, Westernized province. When Britain gave back their former colony to China in 1997, an agreement was made that guaranteed many of the liberal institutions established in Hong Kong. These agreements were an element of the “one country, two systems” model that was negotiated with Beijing.

The muted force of the Communist regime in the former colony is seen mostly clearly in Hong Kong’s thriving capitalist economy. This has made Hong Kong into an important financial center, both for the world and for China herself. Chinese economist, Wen Kejian has said, “the economy of Hong Kong has already been so prosperous and the city has been so open and international that the people of Hong Kong have the wisdom to master their political future.”

This has proven to be a double-edged sword for the leadership in Beijing. After agreeing to allow free elections of Hong Kong’s executive leader, the Communist leadership has reneged on that promise, saying the old system of election from a number of panel-approved candidates will remain in place. This has caused much frustration in Hong Kong because the panel who selects the candidates is very close with the leadership in Beijing. Hong Kong citizens feel their rights as a semi-autonomous province are being infringed upon because of Beijing’s continued heavy hand in their political affairs.

Calls for further democratization have been met with an increasingly hardline stance from Chinese officials over the past 18 months. Zhang Lifan, an economist and historian working in Beijing, has said “it has put tremendous pressure on Beijing, which is most worried about a domino effect. The Chinese authorities do not want to see it spread to the mainland.” As such, along with the hard stance comes the use of more force.

Many have said that the demonstrations, made up largely of young people, were largely peaceful and confined to a designated area, however, once anti-riot police forces arrived and began using force against the protestors, the demonstration got out of hand. The protestors spent the night under fire from police pepper spray and tear gas cannons.

Zhang said that Beijing would use as much force as it deemed necessary in order to maintain control of the situation, even more than they have already used. He said this is a reasonable stance for the Chinese government to take because, “after all, it believes that political power grows out of the barrel of a gun, instead of elections.” It is unclear what direction the demonstrations will take, and few have cared to speculate at this early stage. Although one thing seems clear: the Chinese government is unlikely to bend to the people of Hong Kong’s call for greater democracy. The main question is how much force Beijing will have to use in order to quell the unrest.

While the Chinese leadership is concerned enough to send in additional police to contain the situation, the developing events in Hong Kong are not their primary concern; government officials know they have the force necessary to end the demonstrations whenever they wish. However, if the riotous fever caught on in mainland China, the results would be catastrophic. The small population of Hong Kong is but a drop in the bucket compared to that of mainland China, and it would take a lot of force, money, and violence to quell any riots, though it’s very unlikely that there would be any demonstrations.

Beijing, however, is not taking any chances. Though it already heavily censors the internet, the Communist government has shut down access to a number of popular websites, including Twitter, which could discuss, refer to, or have pictures of the riots. The government has also ended access to Instagram, and has added certain keywords to phrases their text-messaging monitoring software looks for. Any texts containing references to the events in Hong Kong will not be allowed to go through. One Chinese editorial advocating for the use of government troops in quelling the unrest was posted the day after the riots broke out, but it was taken down a few hours later. As far as Hong Kong citizens are aware, Chinese citizens on the mainland remain clueless as to what has been transpiring in Hong Kong, with the exception of those who read the one editorial.

Beijing’s actions reflect the tenuous position it finds itself in. Its people are unhappy with the heavy-handedness of the government, but the only way to control the growing sentiment is to engage more heavily in the very practices which have caused the disquiet to begin with.