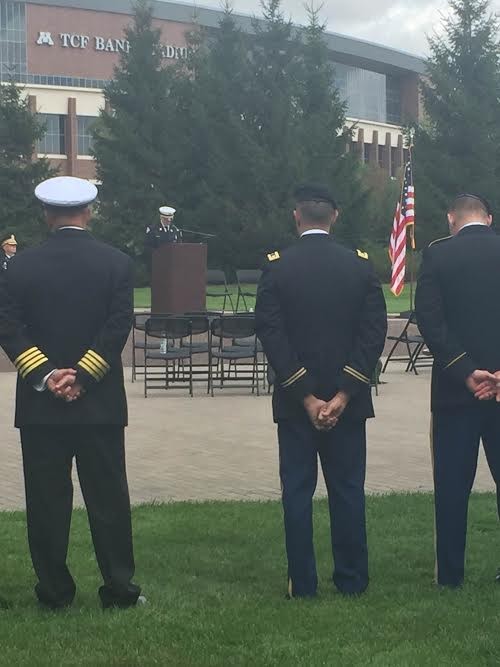 Members of the University of Minnesota community came together Friday afternoon to pay respect to the lives lost in the terrorist attacks on September 11, fifteen years ago.

Students from all background stood with military members, police officers, and first responders to honor the innocent lives lost in the World Trade Center, Pentagon, and in United Airlines Flight 93. Along with the victims lost in the terrorist attacks, the University also recognized the lasting impacts of the attacks by inviting active service members to attend the event.

After a very brief introduction from University President Eric Kahler, the name of each victim was read aloud. All 2,996 names.

There will be a separate recognition during Saturday’s football game for the four alumni who died in the attacks: Thomas E. Burnett of the Carlson School, Gary Koecheler and Clarin S. Schwartz of the Law School, and Robert George LeBlanc of the College of Liberal Arts.

Also speaking during the football game are Pentagon survivors Mark Lewis and Terry Placek, and Scott Wallace who was on the 63rd floor of the North Tower.

Looking back at the attacks that happened fifteen years ago on September 11is never easy, but this memorial showed why it is important. People of all ages, races, and faiths died that day. They were not attacked because of their race or their religion. They were attacked because they were American. That common link brought us together to heal fifteen years ago and it brought us to McNamara Alumni Center today.

While this event had its controversies last year, it seemed to be an event of unification and remembrance. The fact remains that the majority of college-age students were younger than sevenwhen the attacks happened. We didn’t really live in the pre-9/11 world so the impact might not seem as strong, but for one afternoon a year, taking the time to hear those 2,996 names is a great reminder of the sacrifices made on that day and the bond we hold as members of the Land of the Free.