“Let’s Get Back to What Makes Sense:” John Kasich Speaks at CPAC 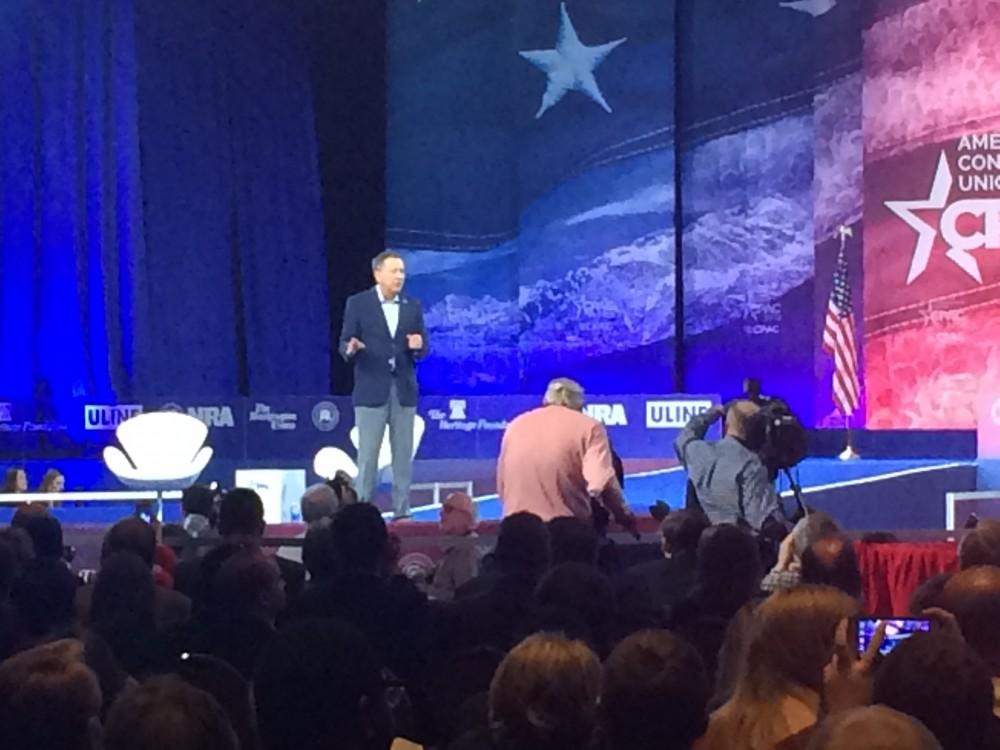 John Kasich has experience. Whether it was his role as an OhioState Senator during the Reagan administration, a member of the Defense Committeeserving withDonald Rumsfeld following 9/11, or his role as current Governor of Ohio. His record is extensive, but he cannot be mistaken as a member of the establishment.

Kasich started off his Conservative Political Action Conference (CPAC) speech by describing the beginning of his political career as a campaigner for Reagan. He talked about the necessity to stand by Reagan, despite the establishment’s dislike for him. “The establishment never liked Reagan, never liked Gingrich, and never liked me,” Kasich declared. However, loyalty, in the case of Kasich payed off, and he was able to garner the support of Reagan, who helped him in getting elected as the state Senator of Ohio. This was a momentous victory for the Republican Party at the time as Kasich was the first candidate to beat a Democrat incumbent in 1982.

As a senator, Kasich developed a budget with the help of only six people. Kasich quipped that, “I know we are over-staffed but if we stay out of each other’s way we can get it done.” It was about slashing waste spending in all areas, including the military budget. Bureaucratic waste under a Kasich budget is on the chopping block. Strong economics is a definitive part of Kasich’s identity, especially as governor.

When Kasich was elected as governor of Ohio the state was in an 8 billion dollar deficit. By the end of Kasich’s first term as governor, the state was in a 2 billion dollar surplus. This significant turnaround, was in complete contrast to the direction of the rest of the country. However, Kasich did not cut social safety net programs, and voiced his commitment to helping the least among us. Under Kasich the programs which helped those with both physical and mental handicaps were taken care of. Help for the unemployed was expanded. All of these social welfare programs these programs were made more efficient. “We have a God given obligation to help those at the bottom” asserted Kasich.

With many threats around the world, Kasich addressed the majority of them with a rational strategy. Kasich laid out a strategy to defeat ISIS that would be similar to the successful United States’ invasion of Iraq in 2003. This campaign would rely on “local power but more importantly our Western allies.” Kasich rejects the idea that air power could be successful in breaking ISIS, nor should the local actors undertake the momentous effort of removing ISIS by themselves. Kasich put it simply, “They won’t.” It is important that the United States not start an occupation Kasich clarified. “Let them sort their own borders out.” In the effort against Putin, Kasich made clear that he would be viewed as a “freedom fighter.” Finally, in the case of Libya, Kasich promised that under him, “America would never get involved in a civil war.”

As leader, Kasich made clear he was willing to work with the other side. He described his policies as not “Republican or Democrat, but policies for America.” In particular, blue dog Democrats (right leaning Democrats) were pointed out as often being very supportive of the policies which Kasich has historically put forward. This raises an important question about Kasich: “Is he truly a Republican?” The more important question though, especially in the context of this important point in American history; “Does it matter if Kasich is truly a Republican or not?”