March for Life Hits the Mall 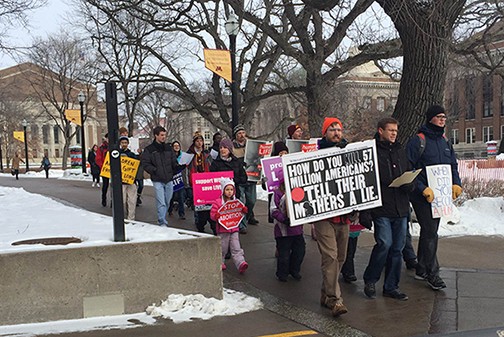 On the 43rd anniversary of the Supreme Court case of Roe v. Wade, approximately 25 people marched the on the University of Minnesota’s East Bank Mall opposing the ruling as part of the nationwide March for Life.

The group containedpeople of all ages carrying signs and sang Amazing Grace in hopes of bringing attention to their pro-life cause. The event was organized by the Maranatha Christian fellowship, a Christian student group on campus.

“Our hope is to remind people of the babies that are dying because of abortions,” stated Maranatha Christian Fellowshipcampus minister, Parnell Mahoney, “We hope that maybe someone’s heart will be affected. Someone who had an abortion or is counseling someone who may consider abortion. We want to help people who may have post-abortion trauma.”

The group chose to spread the message on campus because college-aged people are the age group most impacted by abortion.

The marchers did draw some critics, many of whom stated that the Roe v. Wade ruling is an issue of separation of church and state. Mahoney disagrees.

“Laws are there to protect our rights and liberties,” said Mahoney, “Sometimes we have liberties that conflict, but I do not think religion needs to come into play in order to defend human rights and seek justice. Especially when it comes to ending human life.”

Regardless of the outcome of the march, the group was able to spread their message with conviction.

“This issue causes many people to have inner turmoil or trauma,” said Mahoney, “And we just want them to hear about God’s grace.”

The marchers concluded their demonstration with prayer, “Our hope is to, one day, have the decision overturned and make abortion illegal.”

While it may take time for that to occur, the pro-life movement does not seem to be going anywhere.