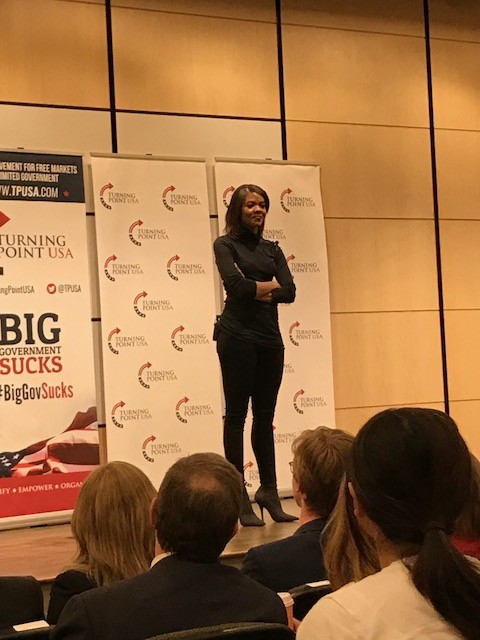 The comment was a reference to Owens event happening on the one year ‘anniversary’ of protest that shut down the campus over racist notes left on a black student’s car. It was later revealed that these notes were created by the same student.

Owens first talking point was the problem with victimhood culture in the black community, and how big government played an essential role in creating the this culture through government welfare programs enacted in the 1960s.

“The black community is worse off today than it was 60 years ago.”

Owens spoke about the experience of her grandfather who grew up in South Carolina. She talked about the threats he faced from the KKK and the adversity of working as a sharecropper. Yet, she also indicated his eventual success; he managed to purchase the sharecropping plantation he used to work on and gain a stable living wage through his own hard work. Owens contrasts the challenges of her grandfather with the rather muted amount of racism experienced.

It is the upward mobility and individualism that Owens is primarily concerned, as well as the preservation of traditional family values.

Owens talked about the first of three ‘verticals’, stable family unit, that are critical to upward mobility of a community. Owens argued that government policies, specifically welfare, has helped to remove fathers from the family unit. Essentially, government handouts have replaced fathers as the primary earner (generator of wealth) within the family. Owens says the breakdown of the family unit created a hole in the culture of the black community which is filled by mass media and mass culture. The goal of this cultural influencing, Owens says, is the politicization of the black community to support a Democrat agenda.

“Why did Hillary Clinton believe that campaigning by holding a Jay Z and Beyonce concert was the way to win the black community. It was pandering.”

Owens questioned why the media chooses to focus on police brutality rather than gang violence on the Southside of Chicago.

“Why did the media focus on Philando Castile, which was a tragedy, but not the 4,000 killed in South Chicago. It is a warzone in Chicago and no one in the media talking about that. Why? Cause they care more about black voters than black lives.”

“America is not getting worse. Black unemployment is going down,” Owens said, praising the Trump administration’s tax cuts. “There is a trickle down effect we are seeing.”

Owens discussed the problem with a high tax system, using her home state of Connecticut as an example of what happens when a state employs high taxes on its wealthiest citizens.

“They loose these wealthy people,” Owens explained. “Local economies no longer have that money coming in and you see a lot of businesses closing up and communities contracting.”

Owens example is perhaps a cautionary tale to other states with high taxes.

“I hope that you have more conservatives on campus,” Owens closed the presentation. “I think having different views on campus is important. Remember, we have a right to think differently.”