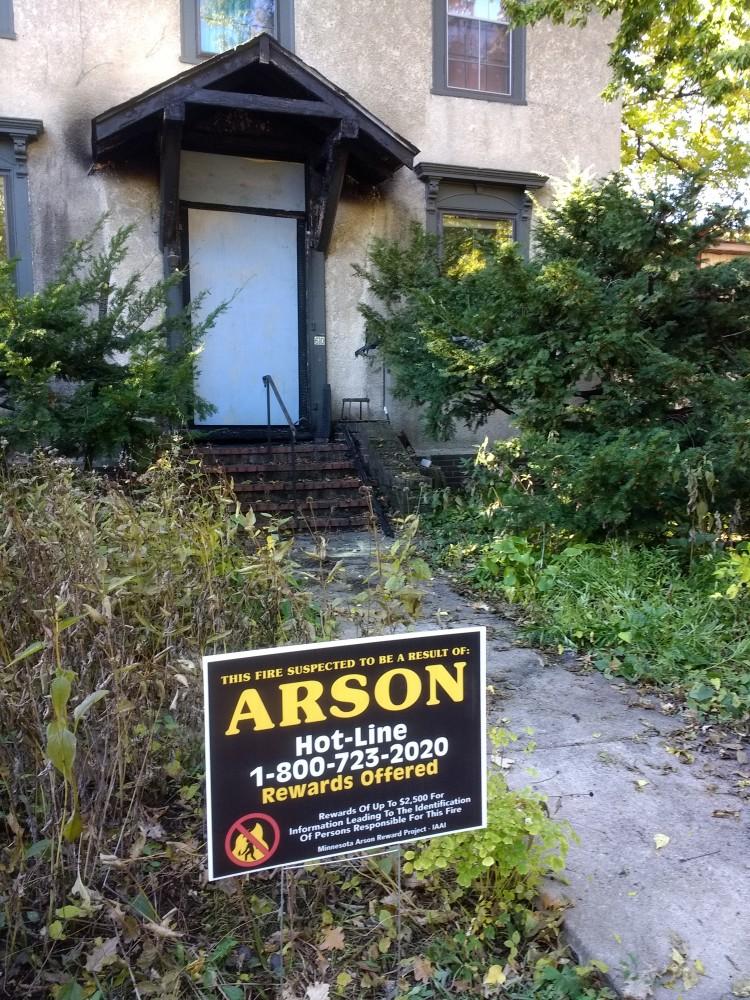 Boarded up front door of the house in Marcy-Holmes. An arson fire claimed the door and frame.

At 7 AM on Monday, October 15, I woke up to a line of emergency vehicles parked outside of my home responding to a one-alarm fire in the Marcy Holmes neighborhood. Having violent flashbacks to the multiple fire alarms that went off in my dorm at 3 AM my freshman year, I figured my neighbors across the street just burned a bag of popcorn or vaped too close to the fire alarm. Unfortunately, this response was to a serious fire that scorched the front door and foyer of the home across the street. Thankfully there were no injuries or deaths as a result of the fire.

The home belonged to a 91-year-old who moved out in July, and the house is currently inhabited by a caretaker who wasn’t at home at the time of the fire. An email sent out but the Marcy-Holmes Neighborhood Association claims that gasoline was used as an accelerant in the fire, and thus the fire was set intentionally.

There is now suspicion that the fire was politically motivated. There have been reports that the home has a “Black Lives Matter” sign in an upper window and a Paul Wellstone sign was by the front door of the home. Police Inspector Todd Loining supports claims that both signs were part of the fire set to the front door.

A politically-motivated arson is concerning; however, the “Black Lives Matter” sign was in an upper window of the home, and it is peculiar that the sign was torched in a fire that only affected the front of the bottom level of the building. It is incredulous to believe that the reported fire only reached the sign itself in the upper-level room. Was the sign moved? As well, Paul Wellstone past away in a plane crash sixteen years ago. Why would somebody set fire to a sign of a deceased and irrelevant politician?

While the fire that occurred in the Marcy Holmes neighborhood is definitely concerning, it is only one of nine arson attacks that have occurred in the greater Minneapolis area since October 1st according to communitycrimemap.com, a site featured on the Minneapolis Police Department’s official website.

According to data released by the Minneapolis Police Department, this number has tripled from the number of reported arson crimes in this time span last year. The department recorded three arson attacks last year between October 1st and November 5th. The uptick in arson crimes is a concerning trend that should be alarming to the citizens of Minneapolis. Arson is a serious crime that amasses colossal amounts in property damage each year, and actions should be taken to make sure that arson attacks don’t continue to be as prevalent of an issue.

If you see or hear of arson or planned arson attempts, reach out to a local law enforcement officials or call the arson hotlines provided earlier in the article.