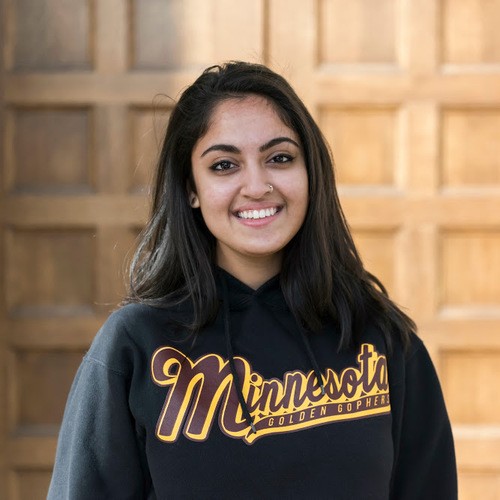 “My name is Abeer Syedah. I am a junior in political science, GWSS [Gender, Women, and Sexuality Studies], and sociology.”

Q: What is your previous experience in MSA [Minnesota Student Association]?

A: I have been in student government since my freshman year, so I’ve had a lot of positions. I started out as an intern, and then I was elected as an at-large, then a ranking at-large representative. Then after at-large, I switched to a committee director role, and then I was vice president.

Q: What are you most proud of in your time in MSA?

A: I definitely, personally very proud of Affirmative Consent. It was a hard fight in terms of changing the language of a campus policy that so many people were involved with, so it is up there in the heaviest stakeholder policy that we worked on. We did have push-back from a variety of people, but we still managed to implement it in time. A lot of people consulted with us on it, and the work from it has been rewarding. I’ve had people come up to me and tell me that Affirmative Consent was very important for them. The other issue I am proud of is the STSS bus stop. I know the difference between the two is astounding, but I use that bus stop every day.

Q: What do you think is the proper role for student government?

A: I really feel like student government’s job is to guide people to the best of our abilities, and to be collaborative across every person who would be involved in an issue. My personal belief has always been that if a student brings us an issue, it is something we have to help them work on it. I’ve helped people navigate issues this year that I didn’t personally find a connection to. If someone brought an issue to us, and it impacted them, we can either adopt it within the amount of energy and space that we have internally. We could take it to our bodies like the forum or the senateif that is something that people are interested in, or we can give them the steps that they need to move forward. We don’t know everything. The important thing is that we have a lot of access to people who can make something happen overnight if really want to, and our job is to present the student body as true, honest stakeholders in the conversation.

Q: What will you do to educate the student body on the role of MSA and how they can utilize it to solve their issues?

A: There is some aspect of MSA that is just the classic civic engagement problem that any group has. Then there is the aspect that we are not running for Congress. We don’t need to be out on a soap box, but what we do need to do is help the student body to think of us as their go-to lobbyist. We have tried some things this year to help with this. We have our student body emails. We contacted every student group on campus and tried to meet with them. We spoke to over 70 groups one-to-one. I’m trying to be innovative. When you are in something for too long, you stop being creative. I plan to add to our student group outreach. I also want to set up tables around campus and just sit there and talk with students. I also want to work this out with the senators and the at-larges to have some type of office hours to meet with the people they represent.

Q: Will you work in support of free speech on campus?

A: I love free speech. I think that protest is a form of free speech. Protest is assembly, and as long as it is hurting nobody and nobody feels unsafe, I think it should be done as much as people want it. In the same regard, any speaker who wants to come to campus, should come to campus. People who have power should not be exerting control over your speech. That is something I feel strongly about. The issue of power is really important here and I think that people should be allowed to debate whatever they want to debate. If it gets to the level of violence, that is a whole other conversation. People need to be able to have conversations amongst themselves. That said, I also don’t think that my personal opinion matters at this point, because what I do is a representation of what the student body is asking me to do. Our job is to make sure we are speaking on behalf of everyone.

Q: How will you respond to conflicts between the MSA and administration or President Kaler?

A: We have met with President Kaler, and our relationship is pretty good now. It does not take away the frustration, but it does take away tension. I think that one thing that is important is that MSA should only be working for the students. We need to work with the administration, but we also need to stand up to administration. I have seen President Kaler and the administration do things that I think are really wrong for students. The important thing for me is making sure we can work for everyone while still standing up for ourselves.