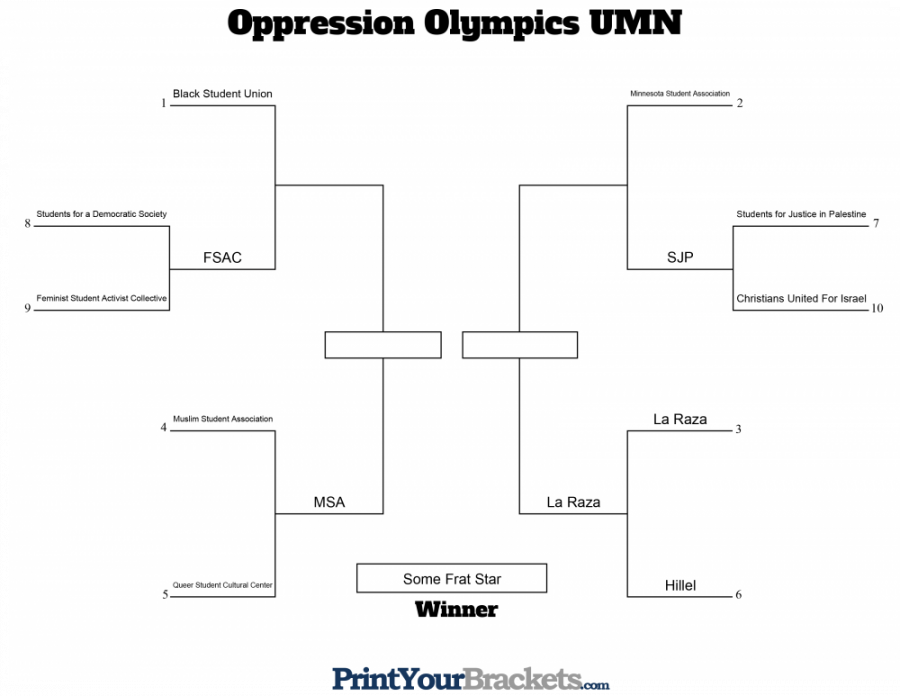 It’s that time of year again, March Madness. Every year millions of people fill out brackets in an attempt to predict the winner of the NCAA men’s Division I basketball national champion. Some do it for fun while others do it to satiate their gambling addiction or to prove their sports prognostication dominance over their roommates or coworkers. Here at the University of Minnesota, another competition is taking place to determine who is the most marginalized group on campus: the Oppression Olympics.

At this point, we all know what privilege is and who has it. White people have it. Men have it. It seems just about everyone has some version of it. This has led to aproblem among marginalized groups: How do they determining who is the most oppressed? For the issue to be resolved among the various student groups that claim to be a voice for the marginalized, a similar bracket system was developed to determine which minority group can claim the ultimate victim status.

The first few rounds brought us in with and exciting start, however, there have not been any major upsets in the competition but the upcoming rounds promise intense competition. In the first round, the Muslim Student Association (MSA) really blew up in the rankings. When matched up with the Queer Student Cultural Center, MSA really shocked the non-conforming in obtaining precedence. After the Orlando Nightclub shooting in 2016, people were very quick to blame gun owners instead of the dangerous ideology that the shooter held. The public became more afraid of guns and islamophobes and decided the gay community was no longer a priority. Despite the great work that both organizations have done to unite students, only one can be the victim. In the end, the Queer Cultural Center was just shot down in their tracks.

Across the bracket, Christians United for Israel (CUFI) faced off against Students for Justice in Palestine (SJP). Bracketologists are still wondering how CUFI even got into the tournament since they are mostly white Christians. Instead of focusing on how Christians have been basically killed off in the Middle East since the fall of Sadam Hussein, they just discussed democracy and called everyone an anti-Semite. SJP really blew up the competition. When a student group is openly advocating for an apartheid state on religious grounds, it is hard to gain any support on campus—let alone in the Oppression Olympics. While SJP were relying on the fact that their people are being treated like animals under Israeli oppression, CUFI is still trying to ignore the 1967 attack on the USS Liberty that killed 34 American sailors and wounded 171 others. CUFI just pretends that it didn’t happen, similar to the gross human rights violations they condone. Although being anti-American usually helps student groups in gaining legitimacy on campus, rationalizing the murder of 34 US servicemen wasn’t enough to overcome the rationing of water, theft of property, and murder of thousands by the Israeli government.

The match up of Students for a Democratic Society (SDS) against the Feminist Student Activist Collective (FSAC) was not too noteworthy. SDS was favored due to the sheer insanity they are stricken with. The two groups are well known for doing most of their work on obscure internet blogs, which would appear to put them on equal footing. However, FSAC edged out SDS because there are more feminists on campus than economic illiterates. The various women’s marches across the nation sealed the deal, proving that gender equity is more important than a violent revolution.

A radical racist group known as La Raza edged out Hillel in the first round. After the election of Donald Trump caused social justice warriors to go into a hysteria about illegal immigration, the public was no longer interested in protecting the Jews from violence and discrimination. In an academic culture where it has become fashionable to be anti-Semitic and to encourage financial divestment from Israel’s Iron Dome—which protects innocent Israeli lives— or commonplace to see swastikas on campus, both the bigots on the extreme left and right side of the political spectrum have been having a field day. The idiocy has reached a level where people refuse to differentiate between Jewish people, Israeli citizens, and the Israeli government. Because of this bigotry,La Raza will be jumping into the next round of the tournament.

The Feminist Student Activist Collective will be facing the favored Black Student Union (BSU), a match-up that is predicted to go in BSU’s favor. Despite the prevalence of gunning down and incarceration of young black men in the streets for the crime of walking while being black, there will always be the male privilege attack by FSAC against BSU. Who wins? Male privilege or white privilege? The answer lies in BSU’s ability to pair their systematic oppression as a race with the oppression of black women. FSAC will need to spend some more time on Tumblr if they truly want to abort BSU’s chances, Planned Parenthoodstyle.

The most talked about match-up on campus among the social justice circles is with the all-powerful Minnesota Student Association, the student government, against SJP. The student government has been known to be a huge conglomeration of all the victims,—a true definition of intersectionalism— which voices the student’s concerns. After this month’s election of a new president, Trish Palermo, many people involved in SJP don’t feel that the new president will do anything to further their cause in student government. This rivalry is expected to get as heated as the Syrian Desert as the two try to vie for public support and to advance to the next round.

It isn’t known how the long the oppression Olympics will last at the University of Minnesota but one thing is clear, it has created a toxic campus environment that has only divided people along insignificant lines. In the end, it doesn’t matter. Some white frat star who voted for Trump is going to win anyways. The cycle of claiming victim status and blaming other people will only begin again.