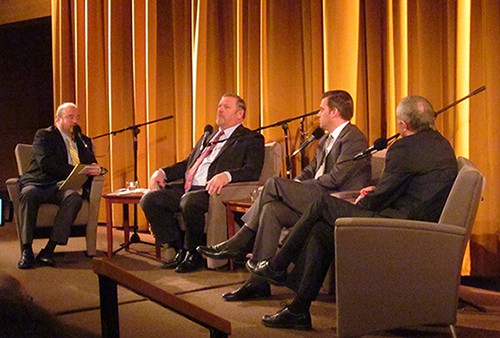 Over 200 people filled Cowles Auditorium at the University of Minnesota’s Humphrey School on Monday afternoon to attend a preview of the 2016 legislative session.

Jacobs began the event by asking Daudt and Bakk if either had any information regarding the state of Governor Mark Dayton’s health. After a string of health issues last year, Dayton collapsed at an event in Woodbury on January 31.

“He’s in good spirits,” said Senator Bakk. Bakk jocularly mentioned that he had recently heard from Dayton regarding holding a potential special session soon, so Dayton must be feeling fine.

Bakk said one of his biggest concerns was making sure next year’s legislators are left with a balanced budget. Bakkresurfaced this concern various times throughout the preview to justify his fears of significant tax cuts.

Conversely, Daudt claimed that he wanted, “significant tax relief for Minnesotans.” Daudt reminded attendees that Minnesota is one of only seven states that taxes retirees on their Social Security benefits.

“Most states don’t do that,” Daudt said. “The bottom line is we’re collecting more money than we need from Minnesotans.”

“2015 was the first time since 2001 that the legislature came into session with a surplus budget,” Bakk explained, elaboratingthat he believes tax cuts will increase the chances of sending Minnesota back into a deficit in future years.

Bakk and Daudt spent time debating whether some of Minnesota’s $1.9 billion surplus should be spent on things like mandatory early-childhood education or on reforming intercity schools. Daudtsaid that he believes problems with the Minneapolis Public Schools’ low graduating rates (less than 60% of students graduate each year) are directly correlated to opportunity differences between suburban children and intercity children. Daudt called the gap “un-Minnesotan” and prioritized giving intercity children opportunity for better secondary education above requiring statewide primary education.

“It shouldn’t just be rich kids that have the opportunity to go to private schools,” Daudt said.

When listing his three main goals for the 2016 session, Bakk mentioned that he wants to make sure the upcoming session addresses Minnesota’s various transportation needs. These needs include finalizing the Southwest Light Rail Project (which would travel from Minneapolis to wealthy western suburbs like Edina, Eden Prairie, and Minnetonka) and whether or not to invest a large amount of money in roads and bridges. Typically, Democrats support the public transit while Republicans focus instead on road and bridge repairs.

Bakk and Daudt spoke on the future of many other programs throughout their preview, including MNSure. While Bakk expressed his support for much of what MNSure has done, including automatically signing Minnesotans up to Medicaid, Daudt disagreed.

“We’ve got to be honest that (MNSure) has been a failure in Minnesota,” Daudt said. “We have a $3 million website…the problem is, it’s not working.” Daudt also said the lack of choice given in whether or not to sign up for Medicaid was a problem with MNSure.

A special session of the Minnesota Legislature has been in talks for a while nowbut is yet to occur. Bakk and Daudt said the session is still possible, but more time is needed prior to holding it. Daudt said the soonest he thinks it could be is next Monday, February 8.