The USA Secedes from the TPP 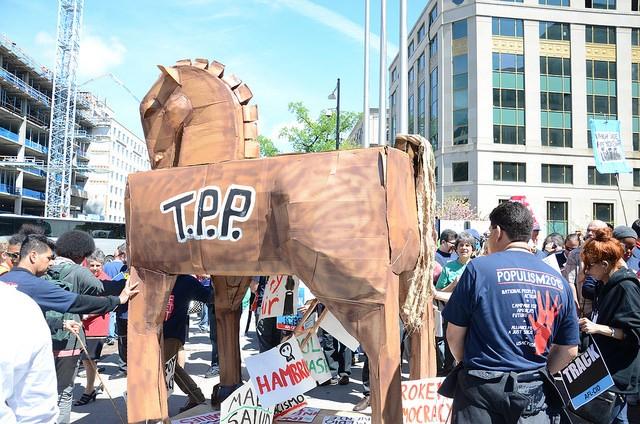 On January 23, just three days after his inauguration, President Donald J. Trump fulfilled one of his many campaign promises by formally withdrawing the United States of America from the Trans-Pacific Partnership (TPP).

The TPP ultimately came out of seven years of negotiations that produced a comprehensive trade agreement between twelve Pacific states (not including China) to open avenues of free trade between one another. Free trade is the policy that means private individuals and companies may do business with individualsof foreign countries without having government impose tariffs or regulation on these goods and services.

In general, the free trade promoted by the TPP means that it would have caused big-businesses whose profits come from exporting goods overseas to receive a boost, whereas smaller businesses and average workers would have been disadvantaged. These projected effects are the same ones that the United States saw after the North American Free Trade Agreement (NAFTA)’s creation in 1994 between Canada, the United States, and Mexico; President Trump also heavily criticized NAFTA during his campaign.

Since its creation, Minnesota has benefited disproportionately fromNAFTA, in comparison to our neighboring states. Some individualsattributethis disproportionate benefiting to many of the large agricultural and high-tech manufacturing companies that reside in Minnesota,as opposed to smaller businesses and family-owned farms throughout the rest of the country.

Minnesota is the nation’s fourth largest agricultural exporter; companies like Target, Best Buy, 3M and other big names are based all around the state. The TPP would have made it cheaper for these moguls to export goods, as well as purchase materials and commodities at a much lower rate as compared tocountries in the Pacific.

The losers in all of this, however, would have been small business and the working class: people who are not employed by a major exporter and/or importer of goods, just as they were under NAFTA.
Now that the United States haswithdrawn from the TPP, White House Press Secretary Sean Spicer stated that it, “ushers in a new era of U.S. trade policy in which the Trump administration will pursue bilateral trade opportunities with allies around the globe.”

Whether or not these individual trade agreements will wind up being better or worse than what the TPP would have offered remains to be seen, but two things are clear: One, that President Trump appears to be protecting small business and individual workers, while hampering big business. And two, that seven years of negotiation and planning of the Obama administration have officially gone down the drain.