Angela Keaton Speaks at the U 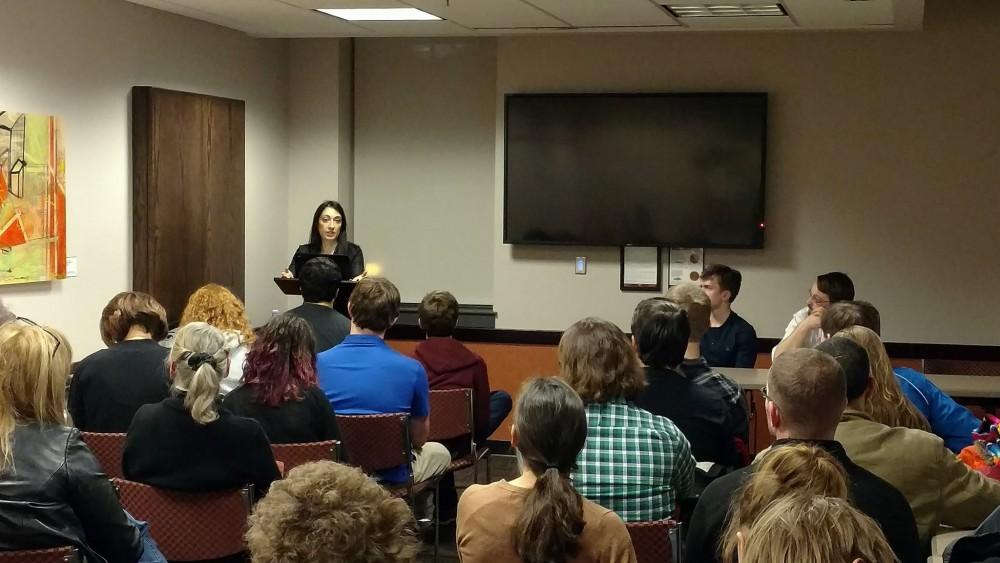 Angela Keaton is currently the executive director of antiwar.com, a leading source for antiwar news and events, as well as the producer of the Scott Horton Show for Antiwar Radio. She studied at the University of Florida, where she received her J.D and M.A. Currently, Keaton works asa legal researcher for a law firm located in West Hollywood, a board member of Outright Libertarians, and a board member of Ladies of Liberty Alliance, which focuses on LGBT and women’s rights through an anarcho-capitalistic lens. Keaton is a former host of “The Liberated Space,” a radio show based out of Austin, Texas, as well as the former Executive Director of the Libertarian Party of California and a former member of the Libertarian National Committee.

Keaton firmly believesthat neither liberals nor conservatives havethe solution to the war problem. Her site, antiwar.com, “[prints] views about antiwar and imperialism from everywhere.” Furthermore, Keaton stated, “Antiwar.com stays the same, no matter who is in office”.

Keaton also touched on how liberals are part of stagnating the antiwar movement. “There haven’t been liberals in the antiwar movement for the past 9 years,” Keatonsaid, later stating, “I can’t get my head around liberals who will vote just so they can have symbolism or feel good about themselves; they’ll vote for more war every single time.”

“If you supported Hillary Clinton and you’re still upset about this… you’re upset because your racist, Islamophobic, murdering candidate didn’t win over this one,” Keaton is proud to say. “I’m a right-wing kook, I’ll admit that,”she added.

With that said, Keaton did not know what to say to Trump supporters, except, “You voted for a cartoon frog”.

Additionally, Keatonasserted that current women’s rights movements, including the Women’s March on Washington, have not done enough to combat Imperialism. “If you’re critiquing power, if you’re critiquing the state and you’re not critiquing war and the empire, you’re basically just supporting a lot of bureaucracies that oppress people in slower, less obvious ways.”

Keaton had harsh words for individuals opposed to Code Pink, a women’s group opposing war. She proposed that this mentality, “doesn’t care how many children lose their limbs.”

Keaton’s criticism of the war-related activities extended past policy and onto personnel.

Keaton believes the current military system is deeplyflawed. “A base is stealing some other country’s property, putting a whole bunch of stuff on it that they can’t use, you know, screwing everything up locally, and letting drunken teenagers run wild.”

“You’re getting a lot of 19-year-olds running around driving drunk, running over locals… that’s basically what our military base system is,” she continued.

The antiwar movement does not just focus on actions overseas.

“It’s a human rights violation, what goes on with cops in this country. And we can kind of cover it up as much as we can, but it’s still there,” Keaton said.

Keaton’s strong beliefs seem to be rooted in humanitarianism.

“I’ve stopped with the being polite about it. I don’t care if people’s feelings are hurt. I don’t care about hurt feelings. When you’re talking about wiping out entire countries, entire populations, all the traditions,” Keaton explained in regards to the resulting culture that emerged in Iraq following the US’s intervention.

Throughout the speech, Keaton expressed a powerful antiwar perspective, expressing her overall desire for world peace.

“You should be in a world where you [can] walk around stoned all the time and not worry about Syria,” Keaton said.