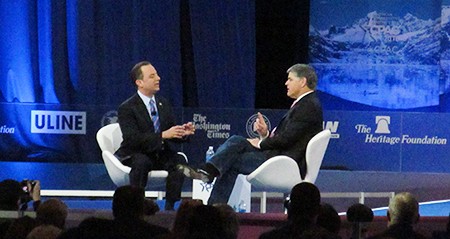 Republican National Committee Chair Reince Priebus said over and over again this morning that the RNC would support whichever candidate won the Republican presidential nomination.

“They’re going to get the full backing and 100 percent support of the Republican Party,”asserted Priebus.

Priebus was keen to emphasize that the RNC is working hard in crafting the ground game and setting up a general election infrastructure for whomever the candidate is. The focus of the RNC is not to pick a winning candidate, it is to help the candidate that wins the nomination to alsowin the White House.

“They have to get what we build in order to win,” said Priebus, “So whether you’re for Ted Cruz, Rubio, Kasich, Trump, they need to have a national party that has its act together, and that’s what we’re all about.”

There has been some speculation that the Republican establishment would block frontrunner Donald Trump from getting the nomination, possibly even attempting to force a brokered convention to achieve this. Priebus called this possibility “highly, highly unlikely.”

Priebus was also asked questions by interviewer Sean Hannity about other establishment playerstrying to destabilize Donald Trump, and to run a campaign with the end goal of ensuring a brokered convention, as a way to block Trump from the nomination. Priebus conceded that he couldn’t control what others would do, but that he’d prefer to avoid such a situation.

Regan’s 11th Commandment of, “Thou shall not speak ill of any fellow Republican,” has fallen by the wayside this election cycle. Last night’s debate was far from anexception.

Priebus’ neutrality is commendable, but last night at a debate watch party approximately half of the audience raised their hands when asked if they were not willing to support Trump as the Republican nominee. Priebus needs to balance the neutrailty of the party with the potentialfracture of the Grand Old Party alongTrump’s hairline. Falling too far either way could cost Priebus his job.