The Minnesota Republic • May 6, 2014 • https://mnrepublic.com/2856/uncategorized/condoleezza-rice-speaking-engagement-sparks-protests/ 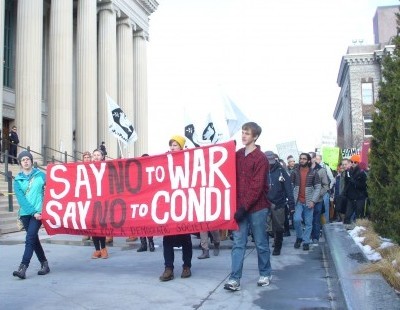 On April 17, Former Secretary of State Condoleezza Rice spoke at a sold-out Northrup Auditorium. She spoke on education and her childhood experiences in the racially segregated South.

Protestors gathered outside Northrup to protest this appearance.

The University of Minnesota chapter of Students for a Democratic Society organized the protest, with over a dozen other groups endorsing the protest. These included groups such as the Minnesota Peace Action Coalition, the Freedom Road Socialist Organization, and Women Against Military Madness. Student groups at the event besides SDS included Amnesty International UMN and Students for Justice in Palestine – UMN.

The official SDS press release stated that Rice was being protested because of her role in the George W. Bush administration, “during which time she propagated well-documented crimes against humanity.” The release condemns Rice’s $150,000 speaking fee (in spite of the fact it was funded entirely by private donations) and states that the University by inviting her to speak was condoning any actions taken by her during her time in the Bush administration.

“One, she [Rice] sold the American public a bill of lies, and that is that Iraq had weapons of mass destruction which she knew to be a lie,” said Maggie Kilgo, a member of SDS. “Second, she approved the use of torture in both Guantanamo Bay and Abu Ghraib and at a number of other prisons around the world.”

“Rice is a war criminal who should be indicted by The Hague,” said William Messing, a mathematics professor at the University of Minnesota.

The focus of Rice’s speech was civil rights. She spoke about her childhood in Alabama and her family history, among other things.

Regardless of the topic of her discussion, protesters objected to her personally. “Her presence on our campus is not welcome, and that’s what we’re here to say,” said Kilgo.

The University Senate, the Minnesota Student Association, and the administration of the University of Minnesota all were in agreement that providing students and the public with the opportunity to hear Dr. Condoleezza Rice speak would be valuable.

SDS presented a resolution to the University Senate on April 3 urging the body to denounce Rice’s invitation to speak on campus without success. The Senate rejected SDS’ resolution.

The Minnesota Student Association passed a resolution asking the Senate not to pass the SDS written resolution. MSA’s resolution quoted the University of Minnesota mission statement which states that the University, “strives to sustain an open exchange of ideas in an environment that embodies the values of academic freedom, responsibility, integrity, and cooperation; that provides an atmosphere of mutual respect, free from racism, sexism, and other forms of prejudice and intolerance.”

“We’re disappointed that MSA encouraged the vote that way,” said Kilgo, “It’s not surprising that they did, given Kaler’s public position.”

University President Eric Kaler had issued a statement to the University Senate the same day that SDS’s resolution had been offered. Kaler condemned the resolution as attempting to inhibit the University’s ability to serve as Minnesota’s “headquarters for civil discourse and the boundless exchange of differing ideas.”

“If you want progress in humanity, if you want us to survive as a species, you have to denounce the behaviors that are completely unacceptable and are destructive,” said out-of-state student Rob Lewis, in regards to the SDS resolution. Lewis was not surprised at the Senate’s rejection of the SDS resolution, “It’s something symbolic that gives people with power an opportunity to show where they stand, and I guess they did.”

At the end of his address to the University Senate, President Kaler put his side of the debate’s point very succinctly, saying, “We can’t have true academic freedom at the University of Minnesota by denying a stage to those we disagree with or disapprove of.”