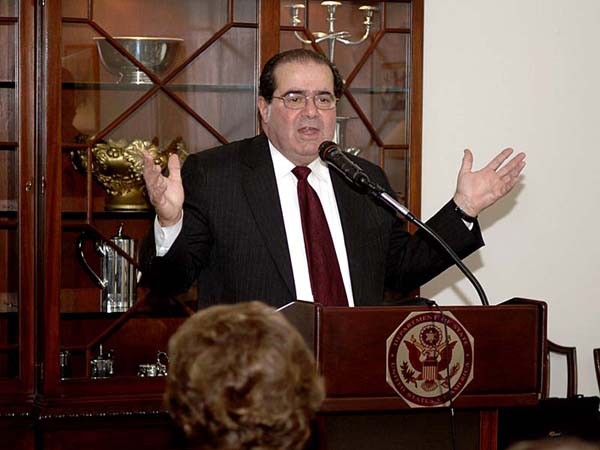 Supreme Court of the United States’ Senior Associate Justice Antonin Scalia spoke to a sold-out Northrop Auditorium on the afternoon of Tuesday, October 20.

Scalia visited campus to speak at the 2015 Stein Lecture. Professor Robert A. Stein, who served as Dean of the University of Minnesota’s Law School for 15 years, invites influentialspeakers well-known in law to entertain and educate current students for his lecture each year.

Scalia, known for his passion, literalism, and colorful language, spoke about common misconceptions of the Constitution. As one of the fourJustices to vote against the nationwide gay marriage ruling in June, Scalia said he stands by what really “is” in the Constitution, versus what “should be.”

Scalia called the modern-dayoutlook on the Constitution, “The Living Constitution.” He explained that people today treat the document like an organism; as time goes on, the Constitution grows, changes, and adapts with the times.

“The Constitution is not an organism, for Pete’s sake. It’s a legal document,” Scalia explained.

Scalia said that though some issues should indeed make for laws, calling some inequalities “unconstitutional” due to unfairness is incorrect; the Constitution does not explicitlysay anything about them.

“Show me the Sexual Preference Clause on the Bill of Rights,” Scalia joked.

Still, Scalia said that when someone finds something stupid, they often take legal action. “Of course it’s unconstitutional and they (bring) it to my Court,” Scalia stated.

Scalia’s uncommonway of regardingthe Constitution exactly asit is has made him well-known for his rigid literalism.He chuckled and mentioned that a new play about him is now running, appropriately-titled, “The Originalist.”

Sometimes, following the wording in the Constitution so closely results in Scalia voting in a more conservative direction. Scalia argued that others villainify him on account of this.

If interpretation of constitutional law in the, “Living Constitution” way were necessary, Scalia continued, the nine appointed Justices would not be the proper people to do the job. Scalia said the Justices were appointed to the Court because they studied law at Harvard and Yale. While studying law made them more efficient at understanding the Constitution, he added, it does not make them the people who should make huge decisions like whether or not abortion should be outlawed.

“I didn’t learn anything (at Harvard) that makes me qualified to sign those things!” Scalia said.

Scalia added that if someone feels, “There oughta be a law,” for something, he or she should make one by convincing fellow citizens and the State. Bringing it to the Supreme Court, however, usually should not occur.