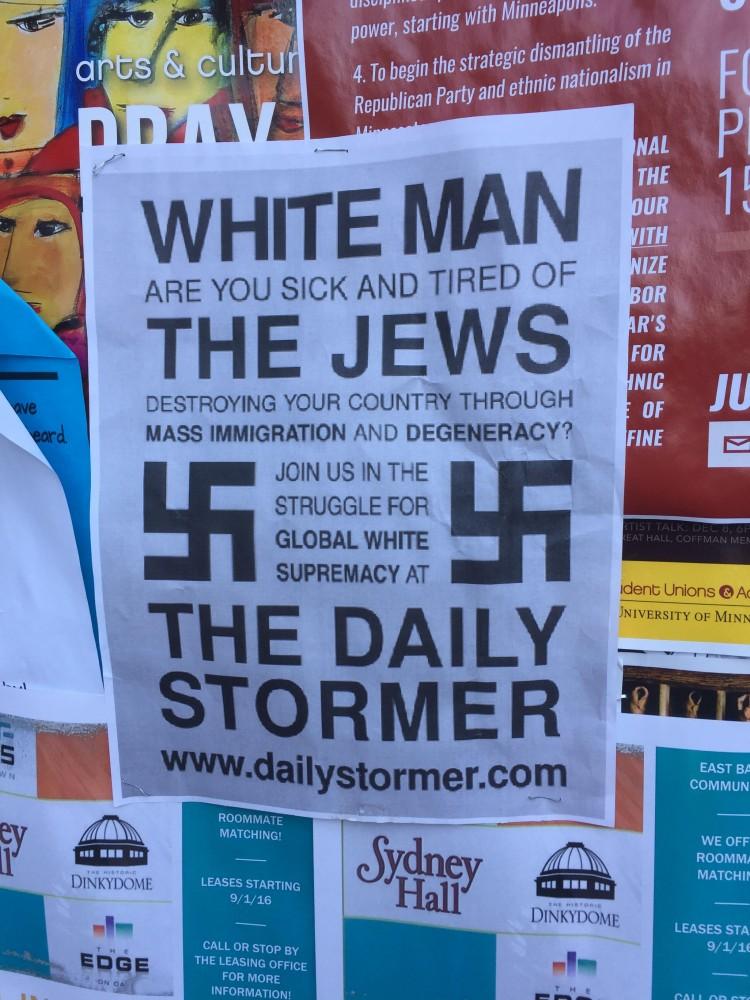 Over the past month, antisemitism has shown its ugly face on campus. Posters advocating for the for global white supremacy blamed Jewish people for “destroying the country through mass immigration and degeneracy”. Beyond posters, threats have been targeted at Jewish community centers in St. Paul and across the country. One Jewish student’s dorm room was broken into and vandalized with swastikas.

The fears on campus are real, and the responses from campus have been strong. President Kaler and the Minnesota Student Association all released statements condemning the acts. Additionally, three out of four student body presidential candidates released a joint statement that read:

“We, as candidates for the Minnesota Student Association President and Vice President strongly condemn theses act of hate and bigotry. These incidents have no place at our University and if elected to serve as President and Vice President next year, all three of our campaigns promise to stand with marginalized communities and speak out against hatred. It is our priority to create an inclusive campus climate where every student can feel safe regardless of race, gender, sexual orientation, religion, or any other identity.”

This strong joint statement condemning antisemitism was a great move in uniting the campus against hate and showing that, no matter our differences, we are going to stand in opposition to blatant discrimination and hatred, yet one campaign—despite being invited—refused to join this statement.

Nick Alm and Makda Biniam are running a campaign based on “student backing and equitability” and building a “socially-conscious community”, yet they did not join in on a joint statement backing Jewish students to help build a community were student leadership will speak out against hatred of any form.

Their campaign stated that they shared the MSA’s letter condemning the acts of antisemitism as their original statement, but only Alm’s name is listed as Speaker of the Forum. Alm’s running mate is not included on the list so this does not represent their campaign.

Alm’s campaign stated that they are working on a comprehensible hate crime response and reporting process.

“We will gladly release a statement as soon as we have tangible actions and ideas to offer students on this campus. We are going everything we can to create sustainable change because this campus deserves more than just words.”

While this is an admirable promise, it is just words. A statement is action. A statement lets the affected community know that they are supported and protected by this campus. To insinuate otherwise is unfair, arrogant, and demonstrates a complete and utter lack of sensitivity to the hate crimes that have occurred on this campus. Nick and Makda talk about inclusiveness, but they do not even have the courage to put their campaign on a statement condemning hate on this campus.

The fact that the campaign failed to release a statement prior to the election shows that the condemnation of antisemitism is not a priority for this campaign. While running on inclusivity, they are failing to include the Jewish population.

Alm’s campaign is supported by groups that stood on the side of the Boycott, Divest, and Sanctions (BDS) against Israel, which is the strongest growing anti-Semitic movement on college campuses.

Alm’s campaign must denounce antisemitism, even if it is not in line with their endorsements. The other campaigns came together. These campaigns have endorsements from communities across the spectrum including the Queer Student Cultural Center, leaders of the Greek Community, and the Asian-American Student Union. They represent people from all backgrounds and managed to condemn hate and maintain supporters. It cannot be too great of a risk to condemn hate, but Alm’s campaign is not taking the risk.