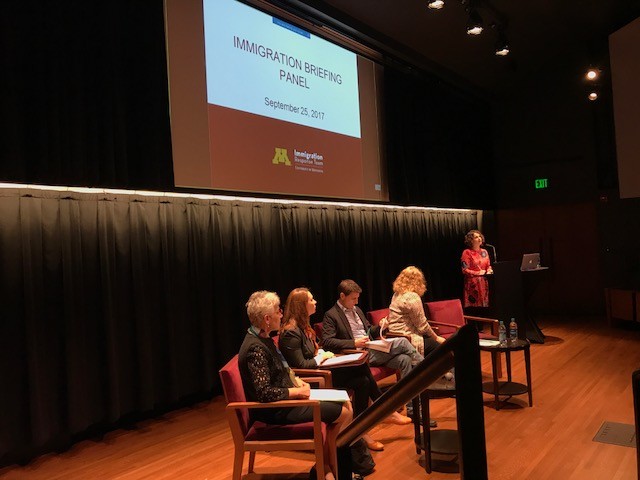 On September 24, the Trump administration issued a new travel restriction on North Korea, Venezuela, Yemen, Syria, Somalia, Chad, Libya, and Iran. After a failed attempt to ban citizens from certain countries a few months ago, the administration’s new launch at a travel restriction has the debate on immigration, discrimination, and the constitutionality of the action. While Trump has emphasized that his travel restriction plans are meant to protect American citizens and avoid any acts of terrorism coming from citizens of certain countries, numerous American organizations across the nation have responded with uproar. The University of Minnesota Immigration Response Team hosted an Immigration Briefing Panel on Monday afternoon to discuss the new travel restriction and how it will impact the country and the campus community.

Immigration policy has always been a prominent topic in American politics, but especially now. Now more than ever, immigration reform is a priority for politicians across the spectrum. A few weeks ago, Attorney General Jeff Sessions announced that DACA, Deferred Action for Childhood Arrivals, would be rescinded due to the unconstitutionality in which President Obama launched the program. While Congress still has six months to act and save DACA, the administration’s message sparked a national debate about the future of DACA recipients and how to address the issue. The administration’s message on DACA has generated a state of uncertainty, anxiety, and fear for students across the nation, including students at our school.

Benjamin Casper Sanchez, director of the Law School’s James H. Binger Center for New Americans and professor of the Center’s Federal Immigration Litigation Clinic, was one of the five panelists participating in the immigration briefing. Throughout his remarks, Sanchez relentlessly expressed his discontent with the President’s actions and blatantly accused the President of trampling the Constitution. Sanchez mainly spoke about DACA and how he has students who have been directly affected by the President’s administration before and after the election. While Sanchez showed contempt for the administration and blatantly accused the President of being sympathetic to the ideas of white supremacy, he emphasized, “We should welcome debate and free speech for all.”

While Sanchez showed contempt for the administration and blatantly accused the President of being sympathetic to the ideas of white supremacy, he emphasized, “We should welcome debate and free speech for all.”

Dr. Barbara Kappler, the Assistant Dean of International Student & Scholar Services, was one of the five panelists present at the event. Despite the tight immigration restrictions that have been placed in the country, the number of international students at the University of Minnesota keeps increasing.

While undocumented individuals have always faced scrutiny and legal challenges, it is evident that it is at an all-time high since Trump’s administration. Chelsea Flaherty, a senior staff attorney at University Student Legal Services, said, “This is frankly a scary time to be a non-citizen in the United States. Our advice now is much more conservative than it was before. There is so much uncertainty that we caution people not to travel unless they absolutely have to.”

Flaherty discussed how non-citizen students were reporting an increased level of scrutiny by border patrols and the amount of interrogation they were receiving. Presumption of innocence, one of the most sacred principles in the American criminal justice system, holds that a defendant is innocent until proven otherwise; however, this does not apply to non-citizens. Given the fact that presumption of innocence does not apply to non-citizens, this puts those individuals in a more vulnerable position to be targeted by state officials.

At the end of the briefing, there was a concise Q&A session for attendees. Questions spanned the spectrum, but most importantly attendees were questioning how they could take action. The panel urged individuals who needed help to seek it, emphasizing that the student legal services at the University of Minnesota is one of the largest in the country. The student legal services have seven attorneys in the office, two of whom are solely immigration attorneys. As the travel restriction continues to unfold, the immigration attorneys will closely monitor the situation and respond to ensure the students at risk can continue pursuing their educational careers at the University.