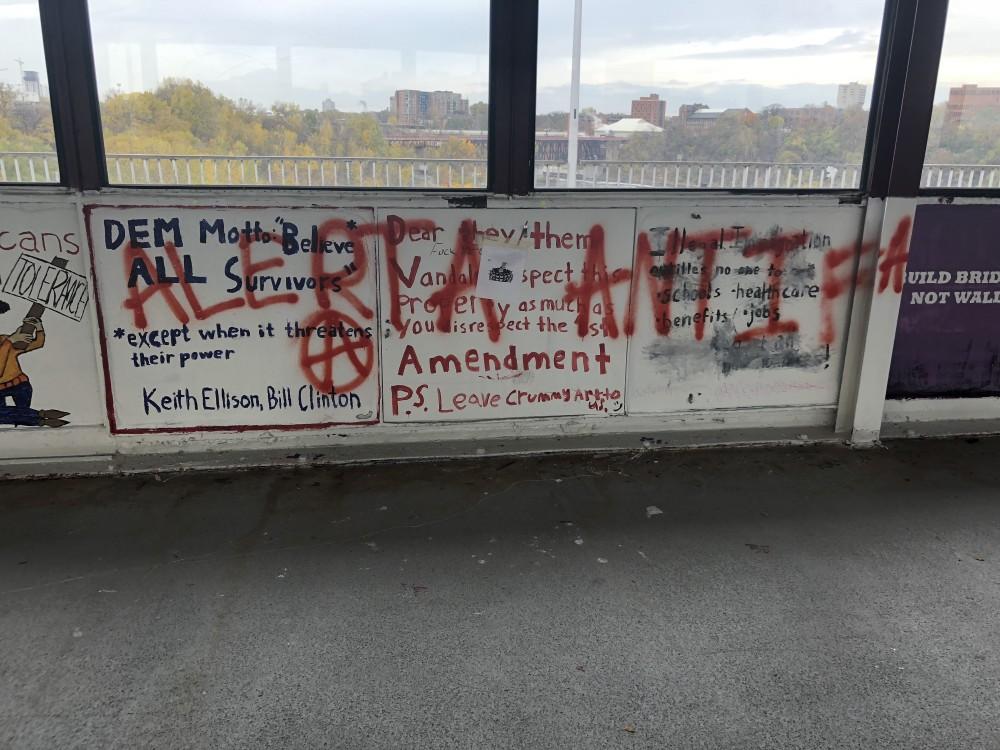 The new UMN College Republicans panel after being vandalized.

“I disapprove of what you say, but I will defend to the death your right to say it” – Evelyn Beatrice Hall

The College Republicans’ mural on the Washing Avenue Bridge was vandalized again this last weekend.

This marks the second time in two months that such an incident has occurred.

The panel had to be redone after the first instance of vandalism which occurred just two days after the annual “Paint the Bridge” event. The mural was redone on Friday 10/26 and by Monday, it was covered in red paint reading “ALERTA ANTI fA” in an apparent attempt to spell “ALERT ANTIFA.”

Antifa, which is short for anti-fascist, is a radical, violent leftist group with a history of protesting conservative events. There are many, many videos online that show Antifa members inciting violence and assaulting conservatives. They have a presence at the University of Minnesota as well. They protest many conservative speakers that come to campus, and some students who really want to larp as revolutionaries even wear Antifa patches on their jackets.

At last year’s Lauren Southern event, a large, violent protest occurred and students leaving the event were followed by the crowd. Some of them were assaulted.

However you spin it, Antifa is a violent group, and their presence on campus in the last few years in addition to their “call to action” through the vandalism of the mural is, at the least, a little concerning. Is the vandal supporting violence against the College Republicans?

In addition to the poorly worded message, an anarchy symbol and a political cartoon (pictured) were both generously added to the mural.

After this year’s first vandalism earlier in October, the College Republicans redid their three-panel mural. The newer, more controversial mural included an entire panel devoted to the vandals, and another that attacks the Democrats response to allegations of assault on their own.

The mural includes the phrase “leave the crummy art to us” which obviously refers to the vandals who, for their own dignity, should have listened. The art really is pretty bad.

*  except when it threatens their power

Even though the College Republicans’ most recent mural was undoubtedly the most controversial so far, vandalism will only escalate the situation. There is no doubt that the university will make no effort to identify the vandals, even though the bridge is plastered with signs warning that vandalism is illegal and a $300 fine.

Universities should be a marketplace of ideas, and everybody should be able to condemn these acts of vandalism regardless of political leanings.