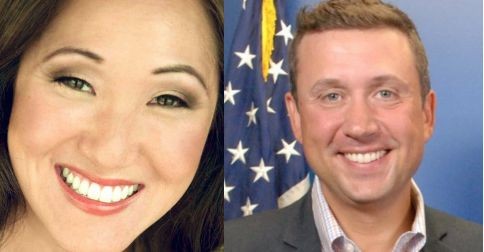 On Sept. 19, the Center on Women, Gender & Public Policy hosted Jennifer Carnahan, Chair of the Minnesota GOP,  and Ken Martin, Chair of the Minnesota DFL, for a conversation on women in politics.. Across the span of the hour and a half discussion, the two, accompanied by University of Minnesota’s Professor of Political Science, Kathryn Pearson and Faculty Director of the CWGPP, Professor Christina Ewig, debated numerous aspects of how the current political climate for women has gotten to where it stands.

Carnahan, who is the first Asian-American woman to be elected to chair, and Martin, who is on his fourth term as chairman of the Minnesota Democratic-Farmer-Labor Party, both share unique and progressive opinions regarding how women should be involved in political affairs, where it stands, and why it is in this position. Furthermore, on how as members of both parties, they can work together in creating a better climate to recruit women. With statistical and national political context provided by Pearson, the two answered questions, as moderated by Ewig.

“I we think comparatively with countries around the world…we are not so well compared to our peers,” introduced Ewig.

In the United States, 19 percent of the U.S. House Representatives are women, followed by 23 percent in the U.S. Senate, 26 percent in all state legislators, and 32 percent in the Minnesota Legislature, as provided by Pearson.

According to the Center for American Women in Politics in congress we see that there are 62 female Democrats, but only 22 Republican, and a 14 to six count in the senate, a fraction that is representative of a partisan divide.

In regards to this, Carnahan stated, “It’s not just a partisan divide but an urban, suburban….world divide.”

“I think there is a lot of misogyny that still exists in this state.. and we see that in the way people view those who work outside of the home,” added Martin.

According to Martin though, research suggests that there is more female action on the left side, because of even representation.

As said by Perry Bacon, writer for FiveThirtyEight, “It’s easy to understand why we are seeing more women run as Democrats than as Republicans in 2018. The combination of the election of President Trump and the defeat of Hillary Clinton, along with the women’s marches of the last two years, has created a political movement helmed by liberal women.”

Suggesting that there is a cultural shift due to present circumstances, is actually nothing short of plausible.

Martin explained, “Parties and organizations are putting [in] a lot more effort and intention… to get more women to run…it takes a woman seven times to be asked to run for office before they do it,” perhaps women are hard to persuade, however, Martin suggested parties are of equal blame, “A lot of it is societal, a lot of it is parties not actively recruiting and grooming candidates.”

Backtracking on the statement of the Women’s March, which took place nearly immediately after Trump’s inauguration (and successfully hosted a second this past winter), the movement has now given birth to a social progressive movement penned the “#MeToo” movement, where women should feel more welcome to come forth in regards to sexual harassment and/or assault.

“The whole me too movement is about creating…an environment where women can come forward and be believed,” added Martin.

As emphasized by The New York Times, “A deluge of revelations about powerful men abusing women, leading to the #MeToo moment, has pushed activists to demand deeper social and political change. Progressive women are eager to build on the movement and translate their enthusiasm into electoral victories in this year’s midterm elections.”

Electoral victories, somewhat of a broad term, may be intended to define pushing more left representatives into positions of power, but it could also mean those very women campaigning themselves.

But this left-leaning polarization is dangerous for the country, as is any definite polarization; both Carnahan and Martin see eye-to-eye on the issue.

“The gender gap in the electorate was first identified in 1980,” said Pearson, “There is a bigger candidate pool for Democrats because Democratic women see themselves as more viable than Republican.”

It is also emphasized that very few women of color vote Republican. But why is that?

People vote and follow the parties that best represent them as a person, their values, and culture. As shown in People Press the Republican Party gains more attention of those predominantly white, and the Democrat received almost equal support among black, hispanic, and other racial communities. Although this can be a principal theme of the policies the party represents, its also fact that the left claims more diverse representation than its red counterparts.

“You intentionally seek out people who don’t always get that opportunity,” said Martin, “We are trying to be intentional about bringing voices to these places.”

A representation of the left being diversity-progressive, Carnahan emphasizes a progressiveness in idea diversity.

“We steer away from identity politics, we look at the person for the characteristics, quality and skill sets…its more about looking at the individual and the [things] they bring,” however it is not a perfect system, “It can provide challenges, but there is opportunity….having diversity of thought, not color of skin or what gender you are,” stated Carnahan.

Which is funny, because in the article by FiveThirtyEight, Republican Kristen Soltis Anderson said, “Republicans are not fans of ‘identity politics,’ and for many Republicans, that means specific, gender-based appeals, they want the most talented candidate, regardless of gender.”

Although these ideas may be representative of their parties, both Martin and Carnahan are expressing opinions to which they believe in. However, statistics and polls may tell and underlying, and dangerous trend in polarity to the parties.

As reported by Bacon, “A CNN poll from late 2017, for example, asked if the country would be ‘Governed better or governed worse if more women were in political office?’ Sixty-four percent of respondents overall said better. But there was a huge partisan split: 83 percent of Democrats said better versus just 36 percent of Republicans- 21 percent of Republicans said ‘worse’ and 28 percent said ‘no difference.'”

Although this is just an opinion poll, the demographics of it are represented within the party. Polarizations such as these are dangerous- they are dividing America. Those who are typically outspoken- the fair left and or far right have became the heard voices of the party. Neglecting those in the middle, such as women, and the efforts of both parties in regards to gender may need reassessing.

“We need to bring this country back to the middle,” said Pearson in conclusion.