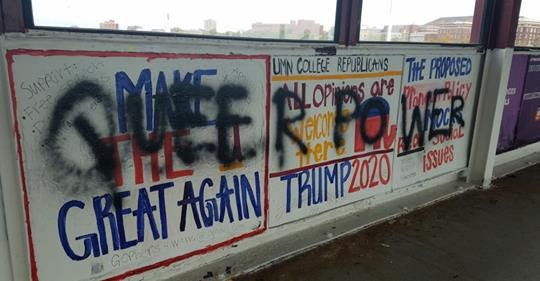 For three years in a row, the University of Minnesota chapter of College Republicans has had its panel on the Washington Avenue Bridge vandalized. Each year, every student group at the University has an opportunity to paint their own panel(s) on the pedestrian-only section of the Washington Avenue Bridge. These panels can display any promotional messages the clubs desire, so long as they fit with university standards, which means they cannot discriminate against or personally attack any group of people.

Each year it seems that a large number of people are upset by the College Republican panels, as they consistently paint the farthest right-leaning viewpoints possible without directly attacking any group of people. For example, their panels have included messages endorsing the presidency of Donald Trump, such as “Trump 2020” and “Build The Wall.” Although the College Republicans are doing nothing wrong by advocating for the political party of their choice, the extremely polarized political viewpoints in recent years have left opponents of Trump’s presidency fuming over the panels.

Last year, the painting of a train with the words “Trump Pence 2020” immediately provoked negative reactions from vehement opposers of Trump’s agenda. Imogen Page, a senior majoring in political science and global studies, attempted to tape signs over the panels that read “resist white supremacy” and “fight fascism.” This, the only real breach of university policy, was met with opposition from a member of the College Republicans, Ethan Bunn. A freshman studying political science and economics, Bunn said that he saw Page attempting to vandalize the signs and tried to stop her. He took her markers and signs and threw them in an attempt to protect the free speech of his group. Bystanders saw the kerfuffle progressing and called the University of Minnesota Police Department. In the time between the beginning of the altercation and the response from the UMPD, Page proceeded to deface the mural by writing “end white supremacy” on one of the panels. That vandalism was promptly removed, but later that evening more opposers of the College Republicans further vandalized the murals.

This year’s panels had messages such as “Make The U Great Again,” referencing Donald Trump’s campaign slogan from the 2016 election, as well as “All opinions are welcome here,” and “The proposed pronoun policy mocks real social issues.” The former references the view of the group that the right to free speech should not be limited to certain viewpoints but rather should extend to all people, as is written in the first amendment. The latter message relates to the proposed pronoun policy that, in an effort to protect the rights of the transgender community, would force all people to use the correct pronouns for their fellow classmates, students and staff members, or risk disciplinary action to the extent of expulsion. This policy is hotly contested by the College Republicans, as well as other conservative student groups on campus, as they feel that it is a breach of their first amendment rights. They also feel that it is unnecessary to place such a large emphasis on what they view as a trivial issue.

The views expressed this year prompted yet another incidence of vandalism, as within two days the words “Queer Power” were spray-painted across the mural. In accordance with the University’s standards for the “Paint the Bridge Event,” none of the messages written by the College Republicans in the last three years have broken any rules. The vandalism, on the other hand, has broken rules regarding the defacing of others’ art, and several of the vandals have been punished with misdemeanor vandalism charges.

The College Republicans realize that by using strongly right-leaning messages regarding Donald Trump and free speech, they are able to elicit a strong emotional response from both sides of the political spectrum. They gain support from many of the right-leaning students as well as staunch opposition from the left-leaning students who seem to do nothing but add to the Republican argument for the right to free speech extending to all people.