Free Speech is more than a check 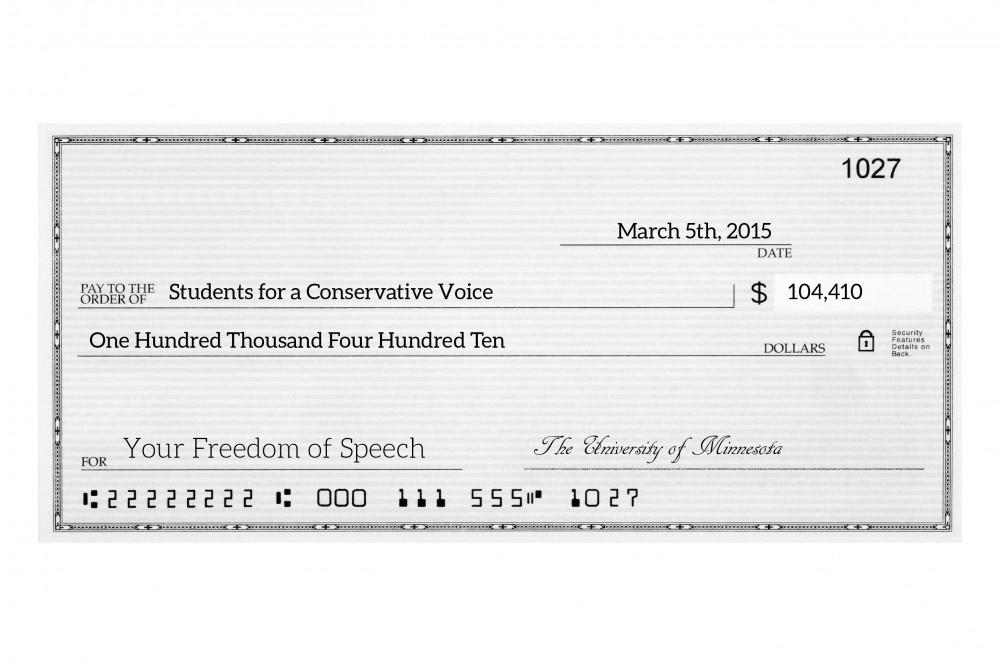 A personal check without names or addresses with fake account numbers.

The relevant content was a back cover published from 2011, before anybody currently on staff attended the University of Minnesota. The cover depicted a person portraying a terrorist holding a firearm and burning a copy of the Minnesota Republic. Along with the picture was the tagline, “The Minnesota Republic: Terrorists Hate It.”

SSFC claimed that this back cover displayed, “an overt lack of sensitivity to the portrayal of members of the Arab world.” According to SSFC therefore, all Arabs are terrorists. After all, there is a rather large difference between mocking violent extremists and mocking a race of people.

While the SSFC did grant this publication a record amount of funding for the 2015-16 school year, it came with the proviso that any future funding would be subject to the SSFC’s discretion as to what constitutes acceptable content.

In their funding recommendation, the SSFC stated, “In the future, close attention may be paid to the content published by Students for a Conservative Voice to ensure that any material that is produced with student fee funds does not compromise the cultural harmony of the campus and to ensure that the material that is produced is not at odds with the criteria in place for receiving this funding.”

The story, originally brought to national attention by this publication’s editor-in-chief via a Campus Reform op-ed, ended up all across the web. Town Hall, the Independent Journal Review, as well as the local Pioneer Press all wrote their own pieces on the incident. Fox News and a wide variety of blogging and news aggregation sites including the Drudge Report picked it up in some form.

Yet the story is not really the story. Nor is this publication’s newfound exposure the story. The story is that this is merely the most recent incident of the University of Minnesota’s intolerance towards Students for a Conservative Voice and its publication.

This publication has been engaged in a months-long struggle to be able to distribute issues to campus that have already been printed with the funds allocated for the present year. Staff at Coffman Memorial Union told janitors to throw stacks of the Minnesota Republic directly in to the trash. They claimed that this was merely because of a lack of a permit to distribute. However, the process of acquiring a permit was mired by delays, rudeness, and at times outright refusal to talk to Students for a Conservative Voice. When the permit was finally granted, it was severely lacking in scope. It was a permit merely for one shelf in the Cube in Coffman – a far cry from the distributive rights of the Minnesota Daily or The Wake, which are also funded by student service fees and have multiple distribution points in Coffman alone, never mind the rest of campus.

The Minnesota Republic’s staff has been refused entry to Roy Wilkins Hall, being turned away by the desk clerk, who informed them that his boss had told him to not allow the publication inside the building. This publication’s signs and newsstands have been vandalized or outright removed from many places on campus.

On top of this, the University of Minnesota rejected a request filed by the Minnesota Republic under the Freedom of Information Act. As a public institution, the university is subject to such requests, and the request filed was very similar in nature to a request that was fulfilled by the University of Minnesota-Morris for the Morris North Star. The Minnesota Republic’s request was to procure emails of professors and staff known to have demonstrated anti-Semitic beliefs or biases against conservatives, in a search for any emails they wrote using racial or other slurs on publicly funded email accounts.

The University of Minnesota-Twin Cities may think that it has successfully ducked a bullet by simply making the SSFC remove the wording that threatens future funding of this publication, but that is not where its responsibility ends. Mere money will never solve the problems of free speech on campus, and the Minnesota Republic has just as much right to distribute its issues as freely and widely as the Minnesota Daily or The Wake. The Minnesota Republic now has a duty to ensure the University of Minnesota complies with the Freedom of Information Act and the First Amendment.