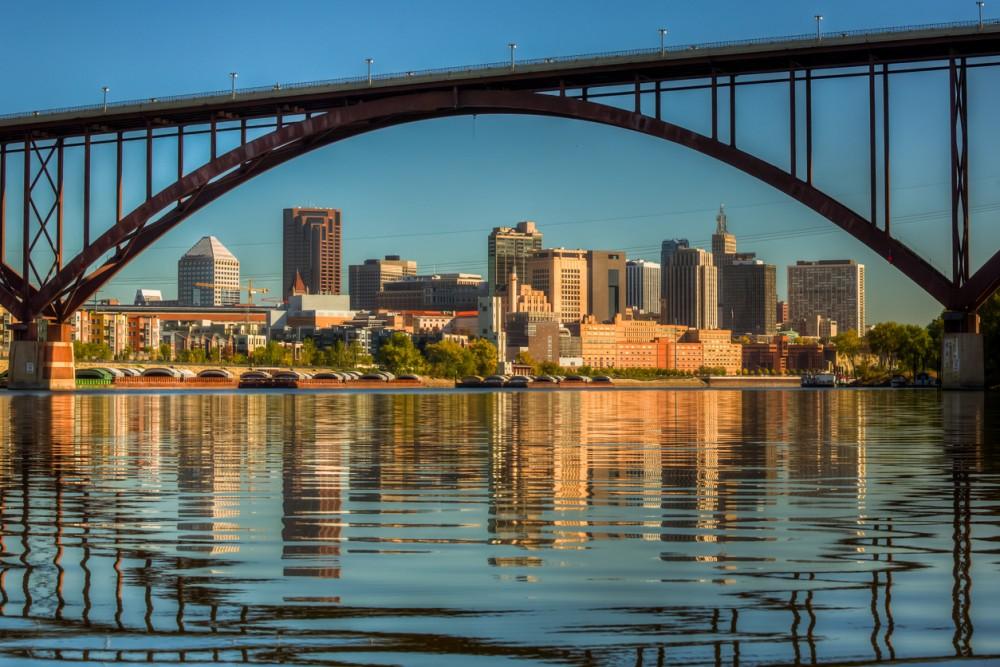 A view of downtown St. Paul in the morning with still water from the Mississippi River with reflection from the High Bridge.

The Saint Paul City Council held a public hearing regarding the proposed rezoning of the former site of a Highland Park Ford assembly plant on Wednesday, September 20.

There were so many residents ready to speak that the hearing was extended past its supposed end time several times, bumping discussion and comment on a proposed menthol ban to the next week’s meeting.

The Ford site, as it is called, is a 135-acre industrial area on the banks of the Mississippi River and the former location of a Ford Motor Company assembly plant that has sat vacant since its closing in 2011. Since the announcement of the plant’s closing in 2007, the community and government have dithered over what to do with the newly available property.

Ford is cleaning up the site in preparation to sell its part of the parcel as soon as next year, so the City Council was finally forced to act and decide what to do with the parcel. City planners endorsed a master plan that calls for high-density transit-oriented development on the site, focusing on public transportation and walkability. As currently planned, developers will construct a series of multistory buildings that could house between 4,300 and 7,000 people on the site, far above the density levels of the surrounding Highland Park neighborhood.

Compromise seems unlikely, as several mayoral and City Council candidates have put opposition to or support for the Ford Site Community into their platforms. Additionally, community groups are handing out signs and literature either expressing support of or opposition to the entire development plan or specific parts.

Neighbors for a Livable Saint Paul is a group of city residents who believe that there has not been enough community input on the study and that estimates of how traffic and density increases will affect the neighborhoods are inaccurate and need revision. They oppose the density that the project will create and the tax subsidies the city has asked the legislature to approve for the project.

As Highland Park is a wealthier and lower-density neighborhood of Saint Paul, opposition to the project among current residents is high, and the councilor for Highland Park stands opposed to the development. This was clear in the statements given at the September 20 public hearing, where residents talked up the livability of the neighborhood and nostalgia for their own childhoods in the area.

However, for all those opposed to the project, there were many speakers and meeting attendees in favor of the proposed development. Sustain Ward 3, a group favoring the development, cites the success of similar brownfield developments in cities such as Denver and Minneapolis as a way forward. They believe transit and higher-density housing will lead to a better community in Highland Park, rather than degrading it as their opponents say.

The group favors the environmental and mixed-use aspects of the development, but like Neighbors for a Livable Saint Paul, they oppose the tax subsidies as proposed in the project. They point to the low apartment vacancy rates in the Twin Cities metro area to demonstrate developers will be interested in the site with or without the significant subsidies.

The conversation was heated on both sides of the debate as public commentary raged on. Community leaders who currently make use of the site or see the project as corporate welfare declared the planning commission and city council cared more about corporate interests than their constituents.

“They want to dump a chunk of Manhattan into a suburban area of the city,” Mayoral candidate Chris Holbrook stated at the public comment hearing. Holbrook was among several mayoral candidates to declare their opposition to the project, while several more declared their support for transit-oriented redevelopment of the site.

The polarization of the Saint Paul community over this issue is unlikely to subside soon. Strong feelings on all sides do not make for easy reconciliation.