Punch a Nazi? Gopher It! 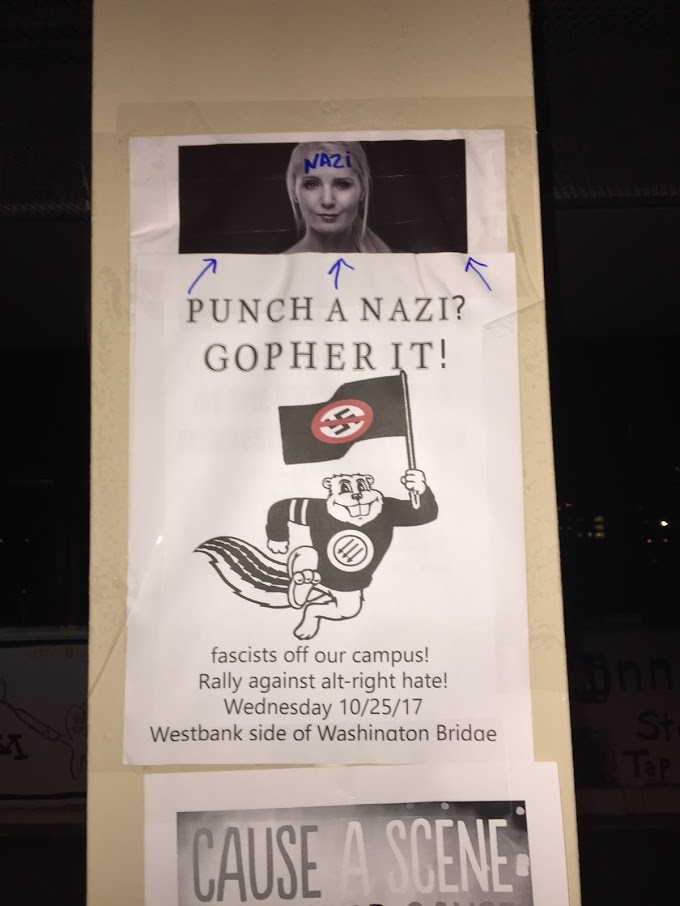 Punch a Nazi? Gopher It!

On October 26th, Collegians for a Constructive Tomorrow and Students for a Conservative Voice hosted the self-proclaimed “identitarian”, Lauren Southern, at Anderson Hall on the University of Minnesota campus. The groups were provided with funding for the event from Student Service Fees.

Southern came to the university to give a speech on “The Evils of Socialist Authoritarianism and the Necessity of Free Speech”. Southern is known for her activity on her YouTube channel, where she has previously stated her controversial opinions on immigration policy as well as the feminist and Black Lives Matter movements.

Around 6:00 PM on the night of the event, protestors and members of the Anti-fascist group, Antifa, arrived outside of Anderson Hall with signs with sayings that ranged from “Black Lives Matter” to “No Alt-Right Nazi Bulls***”. The group of demonstrators began chanting phrases like, “No Trump, no KKK, no racist USA” and “Who’s school our school? Our school!” in combination with yelling obscenities at attendees entering the event.

Demonstrators came to the event to “shut down” what they believed was “white supremacy paid for with your student service fees”. The protest was organized on Facebook and on far-left websites around a week before the event. Across these mediums, protestors were told to bring friends with them and to hide their faces.

While no fights occurred between event attendees and protestors, fights did ironically break out between the protestors themselves. Multiple scuffles broke out amongst protestors while Southern was speaking inside of Anderson Hall. Police officers sprayed chemical irritants into the crowd to break up the scuffles and repeatedly warning protestors that violence would not be tolerated and for the protestors to disperse.

As many protestors chose to listen to the officers’ directions, some felt the protest should not be over. One man retorted to an officer, “How can we be violent when you (the police officers) are the ones who are armed?” This broken logic in combination with repeated warnings from police officers may have just scared rational protestors away as more of the demonstrators left the area.

At 7:45 PM, police armed with riot shields and batons formed a barrier between the protestors in the West Bank courtyard and Washington Avenue Bridge.

Many individuals who attended the event escaped safely, but two attendees did not have similar luck. The two were assaulted as they walked from Anderson Hall to the Carlson School of Management. One of the victims recapped the situation for CFACT. “One of them spit on me,” he declared, also stating “before I could comprehend what happened, they shoved me and I nearly fell…I was completely overwhelmed. I didn’t know what to do. Luckily, my friend called the police and that scared them off.” The other victim was struck in the face and pushed to the ground. The two victims wish to remain anonymous.