Like Zion Williamson’s Shoe, the Entire State of College Basketball Has Been Ripped Open 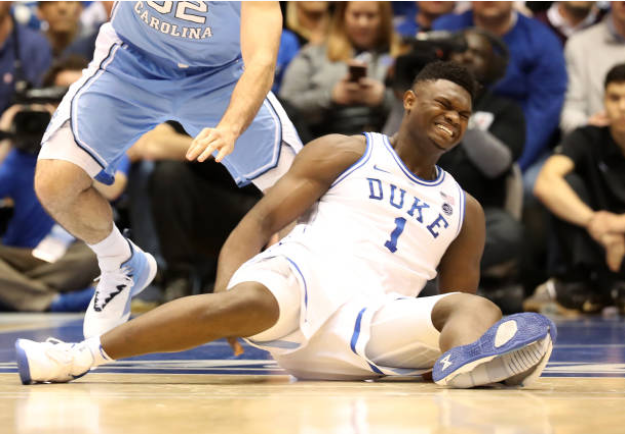 The Super Bowl and an ACC in-conference basketball game certainly don’t seem like they would be events of equal hype, but you would hardly be able to tell the difference between the two if you compared the prices for tickets for the Super Bowl and the ACC’s premier showdown between the Duke Blue Devils and North Carolina Tar Heels last Wednesday night. Tickets for the next chapter in one of college basketball’s biggest rivalries were reselling for an average of $3,296 on SeatGeek.com, only a little over a thousand dollars less than the average resell price of tickets for the most recent Super Bowl and a higher average resale price for four of the past nine.

However, the day after one of the most hyped college basketball games in recent memory, everyone was no longer focused on how expensive tickets were to attend the game but rather on what happened only 30 seconds into Wednesday night’s game.

Zion Williamson, who is widely considered the no. 1 prospect for the upcoming NBA Draft, left the game with a Grade 1 right knee sprain after the sole of his shoe burst open on the court in the first quarter. Williamson is only four months away from fulfilling a dream shared among many young players — signing a contract with a team in the most talented basketball league in the world. For a few moments on Wednesday night, it seemed as if that dream was in jeopardy, and it has many players, coaches, and pundits arguing over whether Williamson should have even been on the court in the first place.

Nike’s stock market value dropped a whopping $1.1 billion dollars after Williamson’s shoe blew out, and as aforementioned, the tickets for the game were selling for over three thousand dollars. These types of figures have revitalized arguments echoing throughout the country regarding whether or not companies like Nike should have so much money depending on players who they don’t and are not allowed to compensate and regarding the current state of the NCAA. Zion Williamson didn’t see a dime of the money circulating around last week’s game, and many current NBA players are sounding off about the unfair treatment of college athletes. Atlanta Hawks guard Trae Young and Denver Nuggets guard Isaiah Thomas expressed on Twitter that they felt Williamson should sit out for the rest of the season to protect his value and prepare for the NBA Draft.

NBA centers Andre Drummond and Demarcus Cousins also stepped into the spotlight after Williamson’s injury to advocate for the player’s long-term success and take shots at the NCAA. Drummond claimed, “He’s selling out arenas. People pay $10,000 to see him and he gets hurt and gets none of that money spent to see him play. You have to think about yourself because you could have a career-ending injury and that’s the rest of the story for him.”

Demarcus Cousins was a bit more direct with his criticism of the NCAA, stating, “Knowing what I know now, college (basketball) is bulls**t”. He also shared concerns with Drummond over the college sports economy, sharing, “I actually saw a post the other day that said the (lowest ticket) for that UNC-Duke came was $2500, $3500. How much does Zion Williamson see? That’s who (fans) are coming to see. So much of that is he getting? Actually, who does it go to? How does it benefit any player on that team”?

The current Zion Williamson debacle is only a symptom of two much larger issues that the NCAA has been wrestling with for years — the NBA’s infamous “one-and-done” rule and the NCAA’s reluctance to pay college athletes for the revenue they generate for their schools.

It’s difficult to understand why the NBA felt “one-and-done” rule would be any less dysfunctional than it is currently. The premise of the rule is understandable, where the NBA felt raising its draft-eligible age limit from 18 to 19 would be a viable way to deter ill-prepared high school graduates from skipping college to try to make it into the league.

While the “one-and-done” rule was made with the intention to be a remedy for this concern, it only became a headache for coaches and especially players. Coaches can no longer hold onto top-level talent for more than a year, giving them an inadequate amount of time to develop prospects and forcing them to pile more resources into recruiting season after season to ensure the long-term success of their programs. For top prospects, its become a relatively meaningless obstacle in their path to an NBA career, and Juniors and Seniors who chose to finish their degrees before pursuing careers in the NBA have found that their draft value has diminished because they are stuck with the description of having limited potential.

Luckily, the NBA has identified this issue and have sent an official proposal to the NBA Players Association to make the draft age 18 again as of last Thursday, but this doesn’t address a much larger amount of concern revolving around the amount of money circulating around college athletics, and this isn’t a question that many can easily answer.

Receiving a scholarship and an opportunity to earn a college degree isn’t an appropriate form of compensation for players who draw in massive amounts of revenue for their schools, television networks, and coaches. Unsurprisingly, schools and coaches fight the notion of college athletes getting paid for their abilities to attract revenue because they feel a college degree can open up a world of opportunity outside of the sphere of sports.

It’s safe to say that college athletes are not compensated fairly for the time they dedicate towards representing their schools and ultimately the money they make for them but is there even a way to fix this? While plenty of people agree that something should be done, something won’t be done easily. If anyone had a plan to do this that made any sense, we would be making at least some sort of progress, but, as it is, the answer to this problem has yet to be determined.

As for Zion Williamson, he hasn’t been distracted by all of the chatter around him the past week, and he has indicated that he still plans to play again this season for the Blue Devils. Before he chases his dream of playing in the NBA, I think he first feels the need to chase a different dream and play for an NCAA Championship. If he chooses to “shut it down” for the rest of the season anyway, its likely that nobody will blame him, and the entire basketball community will be anticipating his return whether it is in a Duke or NBA uniform.