This is the New American Century: Rubio Speaks to CPAC 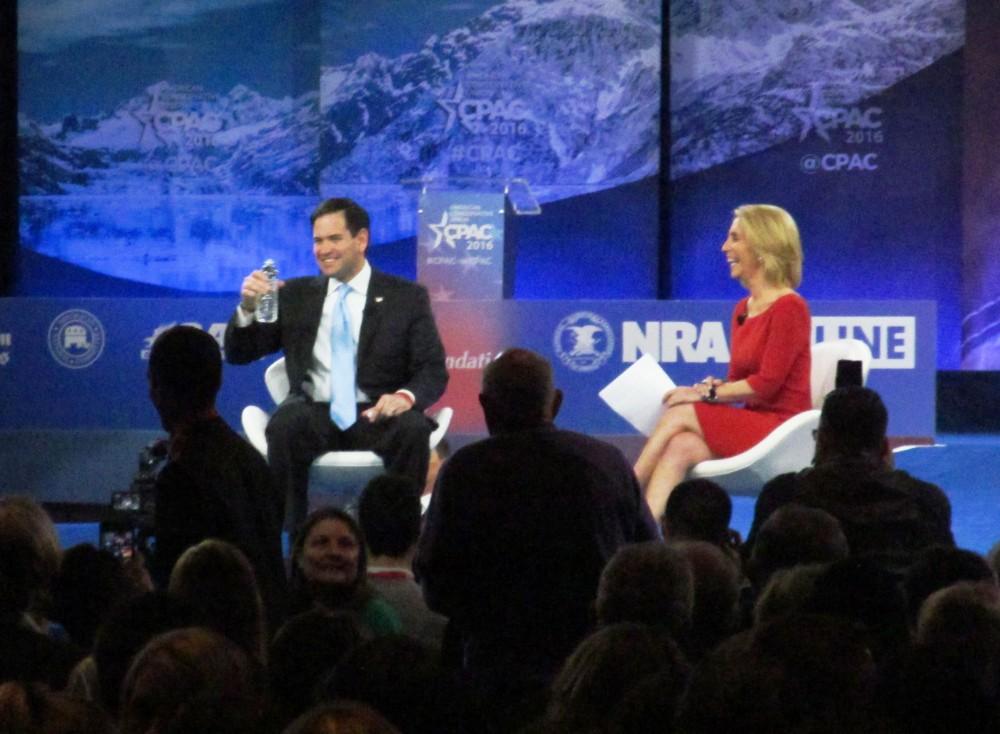 Rubio brought an optimistic and energetic stance to the speech he delivered at the Conservative Political Action Conference (CPAC). However, the shadow of Donald Trump seemed to be constantly looming over the Rubio speech.

Rubio opened his address to CPAC by discussing his ousting of Republican turncoat Charlie Crystle. Destruction of turncoats was the theme of Rubio’s talk. Rubio outlined what it meant to be conservative. “Conservatism can’t be an attitude, can’t be about how many names you’re willing to call people, not about fear, and not about anger” Rubio claimed. Countering Trump’s success in the polls, Rubio stated that “There is a growing amount of confusion on what conservatism is.” Rubio’s brand of conservatism demands to“re embrace the constitution, re embrace free enterprise, and a re embrace strong military campaign.”

In terms of the constitution, Rubio made clear that “our rights come from God,” and government is there to protect the rights of people. Rubio vehemently protected the first amendment, stating that it was the right to religious freedom, and freedom of belief had been attacked. The first amendment would be protected under his presidency. Rubio also declared “the second amendment isn’t a suggestion it is a right to protect yourself.” From Rubio’s perspective, American’s need a right that protects them from the force of government.

The system of free enterprise was pedestalled as the greatest economic system. “Free enterprise is the best system in the history of world. It allows poor people to get richer, and rich people don’t have to become poor.” A strong free enterprise in the United States allows for minorities to better their quality of living according to Rubio. This was something that Rubio states he has experience with by growing up in an immigrant household. Intergenerational growth through free enterprise was at the heart of Rubio’s free speech position. “What will this country be like when my 16 year old daughter graduates from college.” Free enterprise ensures the enrichment of the American citizen for the future.

Rubio’s points on military actually softened a bit during the speech, taking a more Reagan or Kasich stance. He stated that “the world is a safer and better place when America is the strongest military in the world.” Rubio made it come across in his speech that a strong military would in fact be preventative of violence. “Weakness is the enemy of peace. That weakness invites war.” Strength was required against all of the hotspots around the world, including Syria, China, and Russia. Rubio renewed his position of support for “our closest ally” Israel and the need to use Guantanamo Bay as a way to deal with terrorists. Rubio explained that there is a fundamental difference between the criminal and terrorist ‘interrogation’ tactics. “With criminals there is a need to ascertain evidence for a subsequent trial. With terrorist the strategy is to acquire information in order to prevent another terrorist attack.”

While Rubio brought up many points on his own strategy he also made some key strikes against Donald Trump. When it comes to achieving the American dream, Rubio indicated that “the American dream is not about how much money you make or how many building that you have your name on, not calling anyone out specifically. The American dream is about giving your children a better quality of life than what you experienced.” When it comes to dealing with other candidates and members of the press, Rubio pointed out Trump’s actions, stating that “Ronald Reagan was nothing like Trump.”

At the same time, Rubio made an important point about the Democrat Party and young people. “The young candidate within the Democratic Party is Bernie Sanders.”

Rubio brought up many interesting points during his speech. However, will his attractive rhetoric of hope be able to overcome the loudness of Donald Trump, the demagoguery of Cruz, or the experience of Kasich. Only time will tell.