The sub is sinking

Components for baguette with sausage and vegetables on wooden table 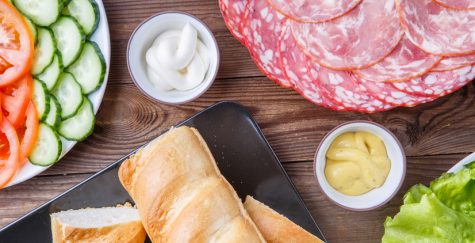 After years of being the front runner of the healthy fast food movement, Subway and its ‘Eat Fresh’ motto aren’t so fresh anymore. As hundreds of stores close each month, it’s crazy to think that there may not be a Subway restaurant every five miles anymore.

With over 42,000 locations in some 100 different countries, Subway was the largest growing fast food chain in the world. Its roots, beginning on the east coast of the United States, focused on the submarine sandwich, the staple of the restaurant since 1968.

The 1990s and 2000s were filled with openings of quick serve restaurants, or QSC’s. McDonald’s, Wendy’s, Pizza Hut, and the list goes on; all once a staple of the average American’s diet. But then it all changed. First Lady Michelle Obama’s Green Initiative was one of many projects started by public figures and health officials to get the American public on the track to a healthier lifestyle. As obesity rates hit all-time highs in 2007, Subway was in the perfect position to make a move.

The “Eat Fresh” slogan began a new era for Subway focusing on the health-conscious individual trying to replace that thousand calorie Big Mac. Spending over $516,000,000 on advertising in 2011 alone, Subway was the pinnacle of the movement towards quick serve restaurants promoting healthier options.

The trend of living a healthy lifestyle has only gotten bigger since then. Fitness companies are booming, and every menu has a salad, even Subway. Even Subway’s spokesperson was hired due to his drastic weight loss, which he claimed he accomplished by eating Subway for every meal.

So, why is Subway losing so many of its restaurants? To start, they aren’t the only sub shop on the block anymore. Restaurants like Potbelly, Jimmy Johns, Jersey Mikes, and Erberts & Gerberts have saturated the sandwich market, taking ample amounts of revenue away from Subway. Furthermore, the QSC era has expanded far beyond the the drive thru. Nearly all restaurants now offer takeout or other fast options. Even supermarkets make to-go meals for low prices.

Subway was also once home to the ambiguous $5 Footlong, which has been lost in the wave of upscale fast food. Now, Subway isn’t seen as a bargain value for most, as their average menu cost is around $7.50. This is all while McDonald’s brings back their one-dollar menu offering a much cheaper alternative.

“It has simply grown too fast,” states Bill Walters, consultant professional. It simply hasn’t kept up with the times. Stores still look the same as they did when they opened, and new food options are not catching eyes. Trends are splitting the fast food market in half. You can either get ten chicken nuggets at Burger King for a dollar, or spend $12 on a salad at Crisp & Green. There is no desired middle ground for the Subway sandwich.

After spending over $25 million on a re-branding campaign, Subway is continuing its efforts towards the new generation, who’s much healthier and disposable than previous generations. Their need for reform is being pushed by its competitors that offer bold choices, big themes, and personalization beyond the meat line.

As consumers look for newer, more updated options, the fall of the largest fast food chain put most of its pressure on its franchisees. These business-owners, who once were at the top of the list, are now facing tight rules and limited corporate support as their businesses fall with time.

As Subway’s stores begin to phase out, it is interesting to see where the market is going. Less business models are adopting the franchise style as more people begin to enjoy consistency over uniqueness. Spending has hit both sides of the spectrum, with fast food prices reaching extreme highs and deep lows. Diversity of foods throughout America has put a bland name on the sandwich. Foreign flavors of sushi and gyros are beginning to fill the stomachs of a much more cultured generation. Where does the trend go next as the sub starts to sink and more Americans look to other fast food options?