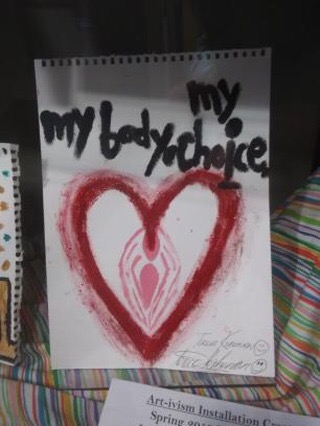 "My body my choice" is a common saying among feminist artivism- usually toting images of vaginas and breasts.

On September 3rd, 2019 Augburg’s A-Mail, a platform for submitted news and announcements had an event posted with the title, “Undoing White Body Supremacy Series” and invitation for,  “Any white faculty or staff, interested in building anti-racist community and building culture among white bodies.”

The message, which specifies only “whites” are invited, is “A foundational series around undoing the patterns of white supremacy, particularly as they exist in white bodies,” and is without a doubt, sculpted with the worst PR strategy in mind. Although the A-Mail is a source for individuals to submit, this message is still on a university interface, disseminated by the university, and should not be the foremost message to get out.

You heard that right. An event to fight white supremacy, that only invites whites.

White supremacy sucks, and racism is wrong. But how can we say that when in the exact same breath, we are only inviting whites to an event, and furthermore, do we really think actual white supremacists are going to attend this “rehab” and “undoing” of their ways? No. You’re going to get a high attendance of social justice warriors, and nothing more. Which is terrible, because when speaking on terms of white supremacy, the faces of those affected should be in attendance, which this is not allowing for, because, remember, only whites are invited.

The issue that we are encountering nowadays is that Universities are at a large, left-leaning. Not that we don’t all already know that, and not to beat a dead horse, but it is frankly achieving the exact opposite of what universities seek to do. If you are an openly Conservative student on campus, you oftentimes are ignored by peers, professors, scoffed at, threatened, harassed on social media, receive constant comments about how people “don’t feel safe around you,” and in extreme cases, students have been assaulted.

Some provoke the polarity by shouting from the rooftops. A vast majority however, are silent out of fear.

I am not saying that minorities (or those that the left overwhelmingly pledges to protect) aren’t treated unfairly. I am however, stating that we have developed into a culture where seemingly one side thinks they are so in the right, that they will go to lengths to create events pushing their agenda, and sometimes with the worst strategy… i.e. unknowingly sounding racist. Its elitist, egotistical, and polarizing. It promotes a false sense of fear in a community with the absence of such problems — its an agenda pusher, and in some cases, a bubble of ignorance.

“College Conservative” does not equal white supremacist, homophobe, xenophobe, racist or anti-female (to name some of the things I have been called without a valid reason).

In fact, I am NOT racist, homophobic, xenophobic, or anti-female. I am pro-choice, pro-LGBTQ+, I love our multicultural community, and quite frankly, I am not a fan of the right-wing extremists such as white supremacists. I do identify as Conservative, but do not align with any of the stereotypes given to me… not even in the slightest. There is a new wave of Conservatives entering the political community, and a lot of them, are just like me.

While we are on the topic of Augsburg University, let’s talk about the pictures submitted by Cody Thompson, an openly Conservative student at Augsburg who identifies with the #walkaway campaign and is planning on voting for Trump in 2020.

“While I believe anyone has the right to exercise their first amendment rights, these vile acts of “artivism” promote sexual carelessness and lack of support for unborn life. I think about the prospective student walking through the halls of Augsburg University with their family and encountering this nonsense. Generally speaking, I think University administrations across America are too afraid to stand up to the [existing] population of radical leftists on college campuses. This is a byproduct of carelessness, it doesn’t promote “safety” or “inclusivity” it promotes polarizing and despicable behavior,” said Thompson.

The pictures he captured, above, encapsulate what being a woman is perceived to be, brought to you by the university community. Now you either resonate with leftist artivism or you don’t. I for one, do not. In fact, these images are representative of a overly polarized and politicized issue, driven by a side that has done terrible things to me- and frankly, I would not feel safe going into a Women’s Center with such photos on it. It attracts attention, which in a lot of cases, is the last thing you want to draw when seeking help. It is a perception of what left agenda thinks the woman should encapsulate, which sucks because the last thing I want to do is flash

I for one, am pro-choice, a view that sometimes gets me in trouble with my right-winged counterparts, but, it is not something I want to be shouting from the rooftops. By having these “artivism” posters outside of the resource center, I feel as though am excluded. Though I agree that Universities should be a marketplace of ideas, these just aren’t it, Chief. On one hand, we have a racist event disguising itself as borderline rehab, and politics outside of the literal one area on campus that should be politics-free.

I hate to use the word “feel” but, it is a feeling of exclusion when you’re a part of a community that hosts polarizing events and politicizes a place that should, literally, be a safe place. What the university community constantly forgets is that no side is the correct side, nor does everyone agree with one-another.

So you wanna talk polarizing and oppressive? Look at those who are believed to be fighting it.

Thompson added, “I personally believe facilitating white supremacy related events demonizes white people and more specifically white conservatives. It promotes division and leaves our campus community and culture worse off. I guarantee you people who push for these events look at conservatives or right thinking faculty students and staff as white supremacists.”

If the right were to do such things, there would be an uproar, the left does it, the silent gets excluded, and nobody says a word.

“I feel if there was an actual white supremacist on campus everyone would know. Far left students staff and faculty need to quit fear mongering;  Conservatives are looked at as white supremacists and it’s despicable,” added Thompson.

We will get nowhere with divisiveness that is based off of stereotype.