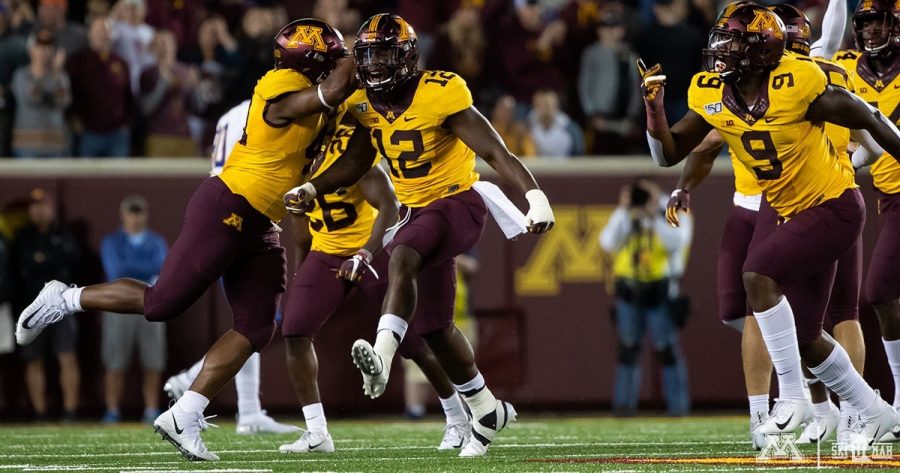 The Golden Gophers won on Saturday, October 19, to post their first victory while ranked as a top-25 team in the last five years.  The Gophers dominated the Scarlet Knights from the get-go and easily covered the 28-point spread which had them favored by the largest margin since 2007.  For long-suffering Gopher football fans, this year’s squad is a breath of fresh air and after last year’s up-and-down season that culminated in a Gopher win over Wisconsin. Many people are hoping and expecting the electric run to continue.  Their nine-game winning streak is the Gophers’ longest since 1941-42, which goes to show just how few and far between such flashes of success have been for the Gopher football program.

Next up for the Gophers is Maryland, who’s 3-4 on the season.  They’ve been inconsistent to this point, and the Gophers are currently favored to win by 16.5  points, according to Vegas Sports Books. That said, the Gophers will have to avoid mistakes if they hope to continue on the tear they’ve been on to open the 2019 season. Gophers’ QB Tanner Morgan will undoubtedly be a huge part of the Gophers game plan considering the Terrapins weak secondary.

Morgan, who ranks 5th in the country in passer rating, takes on the arguably the worst pass defense in the Big Ten this week in Maryland. However, this year’s Gophers team is one of the most well-rounded in years, with senior Rodney Smith just 95 yards from becoming the Gophers career leader in all-purpose yards.  With 576 yards and five rushing touchdowns in his last four games, Smith is a huge reason for the Gopher’s success both running the football and in the passing game, where Fleck has been able to build on the running game through utilizing plenty of “RPOs” or run-pass-option offensive sets.

The Gophers tore apart Rutgers using RPOs, and Morgan has excelled in these type of concepts throughout the 2019 season, as they are fairly simple reads to make and do not put Morgan in much of a position to make a risky throw. Fleck and Morgan look to repeat their offensive explosion against Maryland’s mediocre pass defense, while Antoine Winfield Jr. and the defense look to build on what was a suffocating performance, holding Rutgers to a single garbage-time score during the 35 point blowout.

During the 4th quarter, Rutgers quarterback Johnny Langan made an errant pass right into Winfield’s arms, which he promptly returned 33 yards for the score. It was an impressive performance on both sides of the ball for the undefeated Gophers and included a number of highlight-reel plays (even besides Winfield’s pick-six). Gopher receiver Rashod Batemen made a one-handed grab during the game that was reminiscent of an iconic catch made by former Giants receiver Odell Beckham Jr. in 2014.  It was just one of many high points experience by a Gopher team whose season has been chock full of them up to this point.

Going into the toughest part of their schedule with games against Iowa, Northwestern, Penn State, and Wisconsin, the Gophers matchup with the Terrapins appears even more significant than previously thought.  With all of the momentum on their side, Fleck and the team have a great chance to capitalize and start 8-0 for the first time since the Gophers won the national title in 1941.