‘Jesus Is King’, but the album lacks distinction 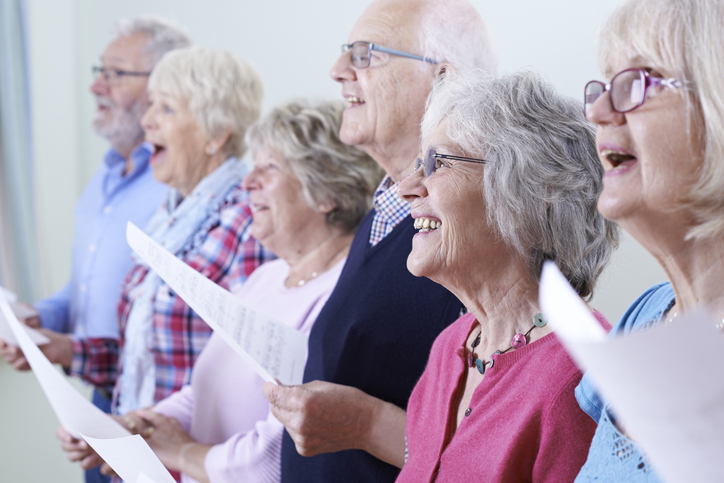 Group Of Seniors Singing In Choir Together

Kanye West, one of the most well-known rappers of the 21st century, is typically known for his iconic lyrics and production. These iconic lyrics usually include a sense of audacity and vulgarity, which happens to be the opposite of his newest album, Jesus Is King. Deciding to make an album reflecting his newly acquired Christian attitude, Kanye changes his style in a way not sitting well with many critics. The album seemingly has great meaning, but the production is lacking compared to what most fans are used to.

Most people recognize Kanye for famous songs such as “Stronger”, “Gold Digger”, “Power”, and “Bound 2”. All feature explicit lyrics, and the production is fantastic. Up until recently, he hasn’t been very open about being a Christian. Along with this, he now openly supports Donald Trump and advocates for freedom of thought among African Americans. Regardless of this controversial decision to approve of Trump, a surprising amount of loyal fans remain. As he moves away from the vulgarity and settles into a more Christian life, fans would only hope that he continues to keep the phenomenal production of his music.

Jesus Is King starts out with a lively song called “Every Hour”, featuring the Sunday Service choir. It sets a religious and energetic tone for the rest of the album. As the album progresses, it moves to a song called “Selah”, which is a word featured in the Bible 74 times, but the meaning is not known. The gospel tune is paired with Kanye’s rap, and I would say it’s one of the stronger songs on the album. The next song, “Follow God”, is slightly repetitive, but has a bit of catchiness to it. Kanye continues with Christian lyrics into, “Closed On Sunday”, which is likely the worst song on the album. In one of the lines of the song, Kanye sings “closed on Sunday, you’re my Chik-fil-A”. It’s difficult to take the song seriously with such lyrics.

Continuing on, the next song gives vibes of Kanye’s older music. “On God” features an electronic sounding production and Kanye being classically egotistical. “Everything We Need”, the 6th song on the album, features Ty Dolla $ign and Ant Clemons. I actually quite enjoy the lyrics, as Kanye explains that we should be grateful for what we have and should avoid spoiling ourselves, though I find this ironic coming from the husband of a Kardashian. “Water”, is my favorite song on the album. It has a unique tone, and the background music is quite enjoyable. The raw emotion of Kanye’s rap is felt throughout this song, and it’s lyrically very strong.

The last four songs of the album are only decent. “God Is” sounds great with the choir, but I strongly dislike Kanye’s singing. It sounds strained and auto-tuned. It almost feels like the song would be better without his contribution, and the choir alone would have sufficed. I personally enjoy the lyrics of “Hands On”. They’re clever, but the production is pretty boring. Fred Hammond, who is featured, has a nice voice but I did not like the way it is manipulated in the song. Another boring song, “Use This Gospel”, features Clipse and Kenny G. Unfortunately, the features don’t add much of anything to spark interest. The album finishes off with “Jesus Is Lord”, which ties the album back nicely with the opening song.

As much as I want it to be, the album is nothing special. It’s obviously very different for Kanye to make a gospel album, but I just don’t think he followed through well with the religious inspiration it should instill in others. The middle is a lot stronger than the beginning and end. To be a decent album for me, I usually would hope to enjoy more than two songs, but Jesus Is King really only sparked my liking of “Water” and “Everything We Need”. With the record being long awaited, it’s a bit disappointing that it lacks distinction. I believe that it would be possible to stay true to the old Kanye while incorporating his new Christian lifestyle, it would just take some changes to the setup and production of the songs.