The Social Dilemma For Representation in Oromia 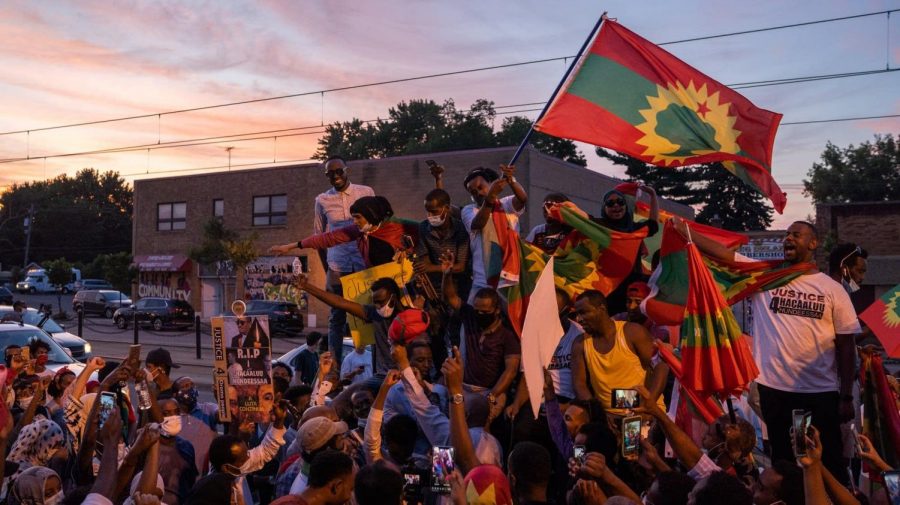 An international issue stemming far from home was brought to the Twin Cities’ doorstep. Minnesota has the largest Somali population in the United States as well as many other immigrants from surrounding East-African countries; Ethiopia being the dominant one. In July, protests broke out around the capitol building, bringing to attention the killing of Oromo-Ethiopian musician/activist Hachalu Hundessa back in Addis Ababa, Ethiopia. But this protest is only the tip of the iceberg of a centuries old conflict deeply rooted in Ethiopian ethnic issues and identity politics.

Ethiopia-located inland on the horn of Africa-is comprised of many languages and ethnicities, mainly of the Oromo, Amhara, Tigray, and Somali people. I cannot, nor do I feel comfortable speaking on the genesis of the ethnic issues in Ethiopia, but I can shine the light more generally on what the struggle is.

It’s crazy to see history repeat itself and for parallels to be drawn across so many kinds of people and places. Rwanda went through something similar in that they had two main types of people; Hutus and Tutsis. One had more representation in government and better treatment and rights in society which lead to struggles and ultimately a genocide.

So, this happened in Rwanda, what does this have to do with Ethiopia?

Hachalu Hundessa held the number one selling album for African music on Amazon Music. His music was widely used to express the oppression felt by the Oromo people, encouraging them to band together and resist. Hachalu died due to gunshots this past July. Hachalu’s platform and voice was mainly through social media and technology, which contributed to the outcry in wake of his death. A lot of speculation towards his death caused young people on social media to lash out and get violent.

I tapped in with a good Oromo friend of mine, Nuubeek. He provided some incredibly insightful and interesting comparisons between the explosion of anger that followed both Hachalu Hundessa and George Floyd’s deaths, both occurring around the same time. He explained that this has been an issue for a long time, but not on this scale. Oddly enough, just like in the George Floyd situation, social media acted as a huge catalyst for the reaction to the death.

He drew similarities between politics in a third world country like Ethiopia to the United States. Politics are incredibly polarized, and there is no middle ground on situations like this. You are forced to pick a side, which ultimately causes sentiments to grow and pushes people further and further apart. Hachalu was promoting Oromo rights and treatment and to many was seen as a martyr for his death. Hundessa’s killing sparked many protests and riots in Ethiopia leading to several hundred dead and many injured.

He recommended me to watch the Netflix documentary The Social Dilemma. Tech companies can so easily predict people and their reactions and take advantage of the many young users of their applications to push an agenda. A very recent and relevant example of that here is George Floyd. Literally within a day, everybody and their mother was fired up about what they saw and read. Social media is a huge, powerful tool, and affects people the same on different continents. Social media allows people to see headlines and immediately form an opinion, and it’s happening in Africa too. The social media outcries throughout Ethiopia were cause for internet blackouts put in place throughout the country, which had been previously used before as a tactic to suppress unrest. It’s interesting to see Africa using social media for political reasons as predominantly as we do in the western world, only for it to be censored because it was too powerful. The exposure and attention that social media brought to what was happening in Ethiopia was incredibly fast and effective which contributed a lot to the violence that happened as groups on both side mobilized and committed atrocious acts.

Nuubeek left me to contemplate by saying that even though there exist thousands of miles between the two places of violence and unrest, the astounding similarities show how easily people can form opinions through social media; polarizing people further than ever before.

That’s not to say that the world, America included, doesn’t have anything to work on, but social media doesn’t represent the silent majority. We need to take a step back and evaluate the affect that social media has on our feelings and perception of the world. Unfortunately, the prospective of ethnic tension in Ethiopia doesn’t look to be resolved any time soon but it is important to recognize that what is happening in America is happening all over the world, and social media does a really good job of fanning the fire. Obviously, there is a lot more to this conflict than what can be summarized in a short article.

More importantly, oppression is alive and well and should be seriously considered as the people of Oromia struggle for equal treatment and rights.

*This article has been updated and republished as of Oct. 22. After further review, some information was found to be incorrect. This article now reflects those changes.