Minnesota Wild on top of the National Hockey League The Minnesota Wild has been a dominant force to start the beginning of the season. With 26 games in, the Wild are currently sitting as the best team in the National Hockey League. Currently, the Wild are holding a record of 19-6-1 while on a hot eight-game winning streak on their west coast road trip. With two games remaining on the trip before returning home, they play the Los Angeles Kings with Jonathon Quick as the team’s backbone and the Vegas Golden Knights, who are finally getting healthy.

The Wild have seen their Calder Trophy winner play at an elite level over the past seven games tallying 14 points with five goals. Kirill has brought new energy to the Wild that no other player has done in the organization’s history. Minnesota’s deep roster with many young prospects developing in the American Hockey League will continue the excitement. Fans anticipate first-round picks Matthew Boldy and Marco Rossi to impact the team once they are in the NHL. 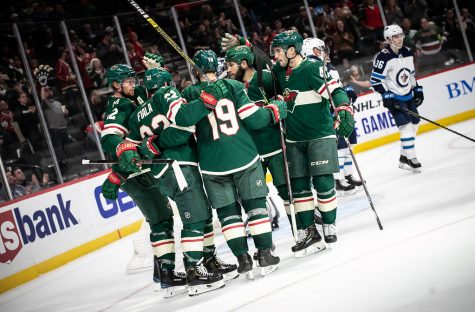 After over three weeks, the Wild saw their captain back on the ice against the San Jose Sharks, where he experienced a lower-body injury. From Edmonton, Alberta, Spurgeon is playing in his 12th season in the NHL, which took place in a Wild uniform. The second-year captain looks to continue the trend of this team and direct them into a deep playoff run.

Minnesota has not made it past the second round of the playoffs since 2003, which was the initial playoff run by the organization. General Manager Bill Guerin knows all about making a playoff run and even winning the Stanley Cup. Guerin won the Stanley Cup twice in his career, once with the New Jersey Devils and the Pittsburgh Penguins. He eventually became the Assistant General Manager before accepting the job in Minnesota.

Bill spent five seasons as the Assistant General Manager in Pittsburgh, where he won an additional two Stanley Cups on the management side of hockey. Guerin has seen his teams win championships from both sides, and not the expectation is to win the first-ever Stanley Cup for Minnesota.

Minnesota has seen strong goaltending performances from their goalies, Cam Talbot and Kaapo Kahkonen. Talbot currently sits with a .917 save percentage, and Kahkonen has a .905 save percentage. Talbot had an impressive showing against the talented Edmonton Oilers on the road against his former team. Cam stopped 39 shots and let in one goal where he made many saves to keep Minnesota in the game. Minnesota gave the number one power play team in the league five chances but Talbot stood strong in the crease.

Minnesota needs to continue keep their focus on winning one game at a time despite two big distractions that are upcoming this season. Minnesota gets to host the Winter Classic for the first time on New Years Day against the St. Louis Blues. Minnesota will get to wear their new jerseys on Target Field with a sold out crowd.

Also, the Wild can expect four or five of their players to compete in the Olympics this winter. The NHL is allowing their players to play for their countries once again after they were not allowed to compete in the previous winter Olympic games. Wild fans will be able to watch Kirill Kaprizov compete for team Russia and make a run for the gold medal game. Additionally, Joel Eriksson Ek and Jonas Brodin are both predicted to make the Sweden roster that will be full of young talent. Another player that is expected to join them in Beijing is forward Kevin Fiala despite not putting up the statistics he did last season. The final player expected to make an Olympic roster is Nico Sturm who will be competing for his home country Germany.

Despite all the media coverage around the Winter Classic and the long break for the Olympics, Dean Evason looks to continue the exceptionally well played hockey the Wild have displayed this season. Evason, who is in the final year of his contract, should be expecting an extension from Bill Guerin anytime soon. Evason has been a promising coach for Minnesota since he was named interim head coach after Bruce Boudreau’s departure.

The Wild return home against the Carolina Hurricanes on December 15.