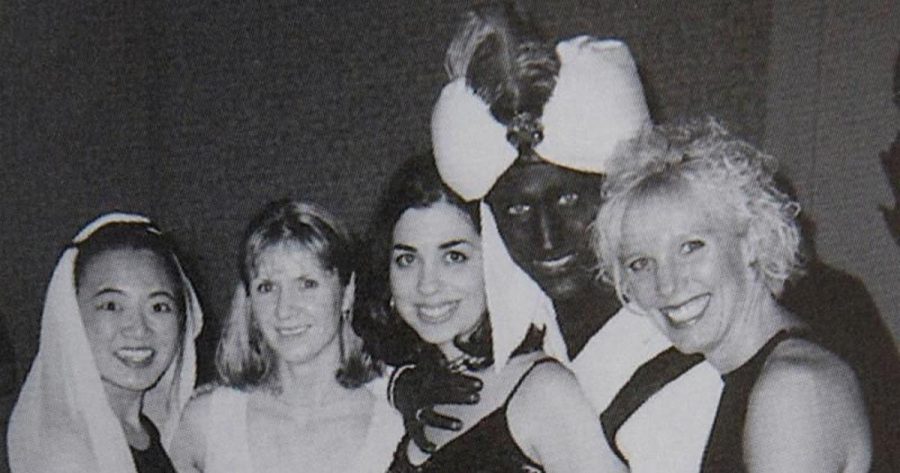 Trudeau posing in brownface back in 2001. Image courtesy of iStock.

As the upcoming Canadian federal election quickly approaches, the Conservative and New Democratic parties are hoping to take over the majority currently maintained by the incumbent Liberal Party, led by Prime Minister Justin Trudeau. The Liberal Party aligns their platform on the ideals of reducing climate change, equality of opportunity, and balancing the budget. They champion Trudeau as an anti-racist symbol, as he has frequently been a critic of Donald Trump’s questionable tweets.

When asked his opinion on Trump’s tweets involving 4 U.S. congresswomen (Trump told them to “go back” to where they came from) Trudeau quickly condemned the tweets by ensuring that that type of racist behavior is not tolerated in Canada, and that diversity is one of Canada’s greatest strengths.

A little more than a week ago, TIME published an article featuring Trudeau in 2001 at an “Arabian Nights” themed party, decked out in full brownface. Brown makeup was applied to his face, neck, and even hands. In addition to this, he seems to be grasping a woman around the neck in some sort of questionable pose. The article also shows 2 pictures of  Trudeau in blackface, including one at his high school talent show singing a Jamaican song.

After the photos resurfaced, shocked Twitter users sent the “Arabian Nights” photo swirling around the platform, using retweets and likes to expose the incident. Trudeau sent out an apology, citing that he didn’t know any better when he was younger and that he now understands the racist context behind darkening your face. Yet, a few days after the photo was released, the conversation seemed to dissipate. Will people simply forget about this blatant racism, solely because he’s liberal? Will Trudeau get a racism pass?

In a similar situation, Gov. Ralph Northam, Democrat governor of Virginia, is still in office today despite an extremely racist photo of him that was exposed earlier this year. In this photo, two individuals are pictured: one in full blackface, and another standing next to him in KKK garb. Despite apologizing, Northam was called to resign by the Virginia Legislative Black Caucus. Despite efforts to remove Northam from office, he still remains there today.

So, why is black/brownface (or any other race) racist? Simply put, it picks out the worst stereotypes of a certain race and shows them off. Historically, blackface had often been used to accentuate black stereotypes. A white person would wear black makeup, enlarge their lips, and wear raggedy clothing. Many times they would make a mockery of how black people act or dance or sing, simply for the entertainment of white people. When worn today, blackface is just as disgusting as ever. To play on the stereotypes of black people is just as disgusting as ever. Even though the pictures were taken years in the past, they’re still new enough to be considered outlandish.

The Trudeau and Northam incidents reveal a great deal of hypocrisy in the liberal agenda. Seemingly, elected officials claim to be anti-racism, anti-homophobia, etc, yet still have contributed racism to society themselves. Could the platforms of certain politicians be influenced by what society deems to be most politically correct? Yet the candidates themselves still are racist in their own actions? Truth be told, politics involves a great deal of pandering. On either side of the spectrum, politicians usually tend to subscribe to the views that people want to hear. Despite partisanship, racism is racism. The fact that Trudeau is seen as anti-racism, yet openly took part in one of the more racist things you can do, should say a lot about how he may be pandering for political gain.

Just because someone is liberal, left-leaning, or seemingly anti-racism, does not mean they should have their incidences of racism simply swept under the rug. The ability to regret, change, apologize, and move on is a possibility for most people, but spewing out anti-racist rhetoric while you have knowingly taken part in racism without revealing it is plain wrong. This, in itself, presents the cognitive dissonance of these men. While hiding the fact that he participated in brown/blackface when he was younger, but preaching about the wrongness of racism, does not paint a pretty picture of the kind of person you are. To truly change is to reveal it to yourselves and others, show that you have changed, and live a life without the nagging cognitive dissonance. Authentic politics is a goal to strive towards.

US workers head to Canada