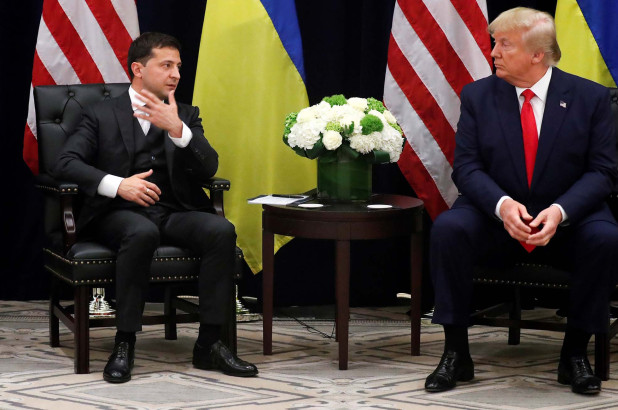 Speaker of the House, Nancy Pelosi, and the democrats launched a formal inquiry into the impeachment of President Trump. She stated that, “he must be held accountable – no one is above the law.” After Congress heard about President Trump’s phone call to Ukrainian leader Volodymyr Zelensky, they immediately created a rumor that President Trump pushed Zelensky to look into Biden and his son. This is all being done in hopes of creating movement toward winning the 2020 election. It’s as if anytime our country elects a republican leader the left immediately turns to the excuse that something “illegitimate” is happening.

This whole thing started in April, when Hunter Biden’s term as a Burisma board member expired and he stepped down from the company. This sparked interest in the American political world, as we later find out in May that one of Ukraine’s top prosecutors was quoted saying there was no evidence of wrongdoing.

Recently uncovered, The Trump Organization was able to gather intelligence on three Democratic senators who wrote to Ukraine’s Prosecutor General in May 2018 pressuring them to cooperate with the Mueller Investigation. They wrote, “As strong advocates for a robust and close relationship with Ukraine, we believe that our cooperation should extend to such legal matters, regardless of politics.”

As strong advocates for a robust and close relationship with Ukraine, we believe that our cooperation should extend to such legal matters, regardless of politics.”

To make it worse, it was found in 2016 that Biden threatened to freeze $1 billion of U.S. aid to Ukraine if they were unsuccessful in firing the prosecutor. Republican strategist Ford O’Connell commented on this by saying, “The Democrats who are now trying to impeach Trump were the first to open the door with Ukraine.” This sounds a lot like what President Trump is trying to do, yet Congress thinks he is acting poorly and ‘pressing’ President Zelensky.

The other day, President Trump was able to sit down and meet the Ukrainian President for the first time in person. Trump congratulated President Zelensky on his parliamentary win and explained that we would continue to support Ukraine. Zelensky responded, “We are ready to continue cooperating for the next steps specifically we are almost ready to buy more Javelins from the United States for defense purposes.” Yeah, really sounds like President Zelensky is being pushed around.

Trump seemed to be very polite about how he went about asking, saying “I would like to have the Attorney General call you or your people and I would like you to get to the bottom of it..” ending with “whatever you do, its very important that you do it if thats possible.” Zelensky responded, explaining that one of his assistants have already met with Giuliani, former Mayor of New York City and current attorney to President Trump. He said that the investigation was also of importance to him. Zelensky clarified, “I guarantee, as the President of Ukraine, that all the investigations will be done openly and candidly. That I can assure you.” It really was a failed attempt at trying to execute one of the most severe actions Congress has the option of taking against a sitting President.

The Left seems to be trying to throw anything they can at President Trump in hopes that something will someday stick. This was supposedly what the Democrats and Speaker Pelosi were talking about when they said that “The actions taken by the president have seriously violated the constitution,” when in reality President Trump is only doing his job, and succeeding at it!