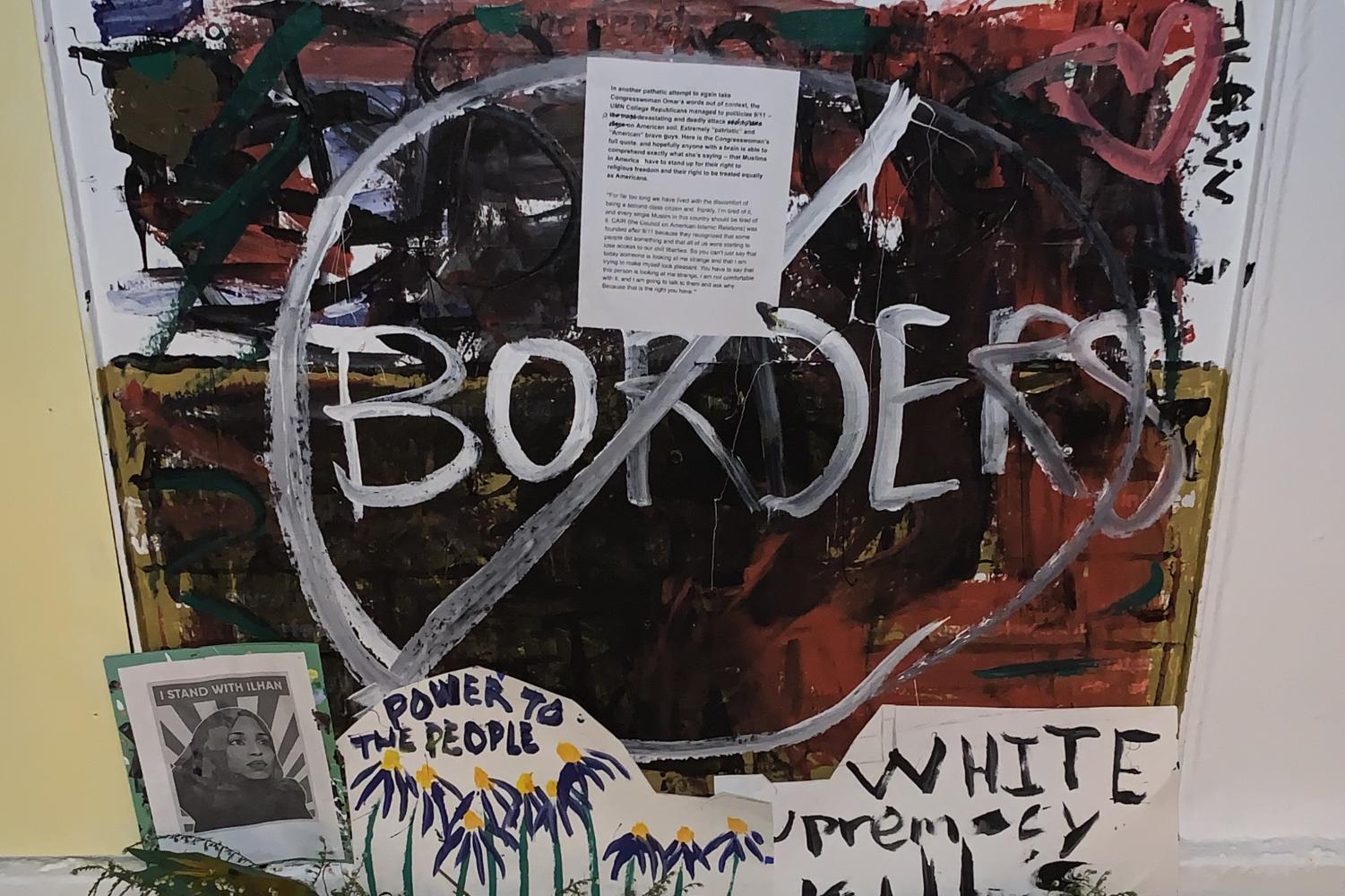 The panel of The College Republicans, less than a day after they had painted it. The vandalism happened mid-day, with a “ceremonial” vigil held in front of it while the vandalism occurred. Photo courtesy of contributor Brandon Prichard.

The panel of The College Republicans, less than a day after they had painted it. The vandalism happened mid-day, with a “ceremonial” vigil held in front of it while the vandalism occurred. Photo courtesy of contributor Brandon Prichard.

In response to the vandalism of the College Republicans bridge panel

Nathan Harman, Contributor and Chairman of College Republicans at the University of Minnesota 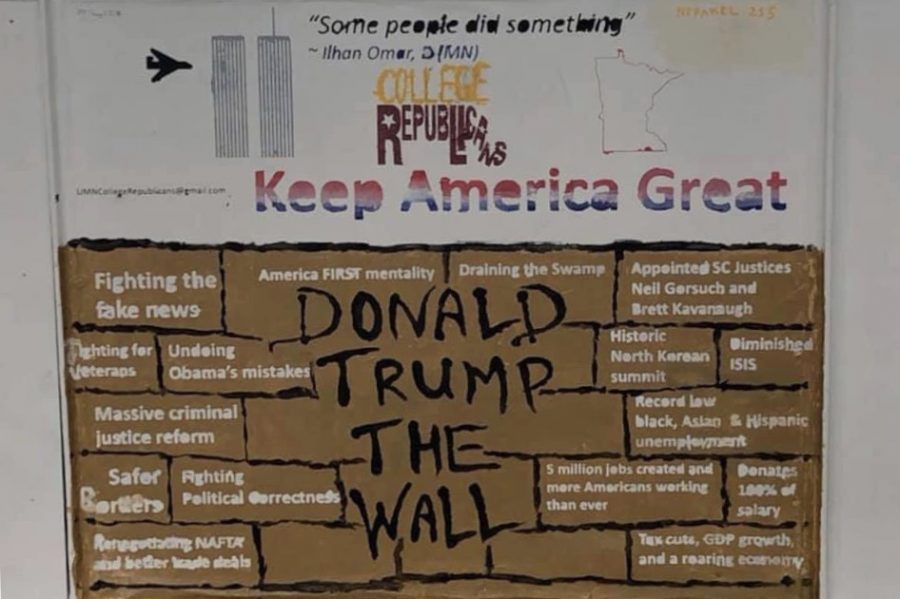 Gallery|2 Photos
The original painting of The College Republicans panel, citing the numerous accomplishments of President Trump, alongside a quote by Ilhan Omar – a quote that begs individuals to hold their representatives accountable. Photo courtesy of contributor Brandon Prichard.

Censorship is a powerful thing. We hear about it in statist nations like China and Russia. We fret about it on social media when topics of government regulation come up. We read about it in our history books when studying nations like Nazi Germany and the U.S.S.R. And now, we’ve seen it yet again on our own campus on Friday with the vandalism of the College Republicans panel on the Washington Avenue bridge.

It is no secret that our campus has a burning distaste for President Trump and many conservative principles, and while the merits or lack thereof of this distaste is not the subject of this letter, it is still worth noting the accomplishments his administration has made over the past three years. From record low unemployment and larger GDP growth, to making groundbreaking diplomatic inroads with North Korea, these achievements are solid strides in our standard of living that Americans from all across the political spectrum can come to appreciate. While it does not excuse any serious transgressions on the part of the Mr. Trump, it does provide us at least some comfort that whatever the outcome of this administration is, there are still some serious successes.

Along with this, much of the controversy over this panel has also stemmed from the depiction of the World Trade Center along with Ilhan Omar’s quote regarding it: “Some people did something.” As members of representative Omar’s district, we have a special duty to hold her accountable as well. For many of us, this depiction trivialized the worst terrorist attack in U.S. history. To gloss over it in such fashion merits serious discussion about her beliefs. Our goal behind the panel design is not to take an easy shot at a notable congresswoman. Instead it’s to get people who walk by and see it to think about whether or not a woman who says something like that is someone they want to be represented by in Washington, regardless of their political leanings.

With this said, however, I also understand that as a conservative, my first duty is to the truth, and to the defense of the right to speak it. What we saw last week with the defacing of our panel on the Washington Avenue bridge is a show of the ugliest type of disagreement and closed-minded thinking: one that equates dissent to sin and that seeks censorship over discourse. The irony of this is that it falls at the heart of an institution that values discourse and discussing hard ideas with people from all different backgrounds: a university. No person who supports this type of vandalism can call themselves a supporter of free speech or consider themselves as having a truly open and accepting mind.

Instead it’s to get people who walk by and see it to think about whether or not a woman who says something like that is someone they want to be represented by in Washington, regardless of their political leanings.”

As Chairman of College Republicans here at the U of M, I am thankful to have such a broad and diverse set of friends and acquaintances from all political beliefs, genders, religions, races, and sexual orientations. So many of the interactions I have on a day-to-day basis that shape my beliefs are with people who have completely different experiences and beliefs than my own—and I value that to no end. It is these people who are the sturdy base that I can stand on to do what I do for College Republicans. I work to keep my political blind spots in check, to try to understand where others are coming from, to understand how their backgrounds and experiences shape their beliefs, because that is what a truly open mind seeks, even when it’s uncomfortable. I hold our members to the same standard, regardless of their leanings. We try to debate with nothing but civility and respect at all times.

But no matter the ugliness of how people respond to us, we will serve that respect for ideas to everyone regardless, and that’s why our members will never be seen so much as laying a finger on the panel of another group, even if their ideas run contrary to our own. We also implore the University to actually take action against the students who defaced our panel this year and see to it that justice is dealt to them. As an institution committed to free speech, the University has a duty to respond to and stop those students who work to inhibit it.

I would like to thank all those who have offered their support through these events, either by being at the bridge while our team was painting the panel, or through voicing encouragement on social media. Also deserving of thanks are those who reached out to us in civil disagreement and who offered their thoughts, while contrary to our own, genuinely and gave us new insights into different viewpoints on the matter. It is people like them who keep politics accountable, and for that they have my sincerest gratitude.

So to those who vandalized our panel on Friday, to those who think they are above the law and civility for the sake of silencing an unpopular dissenting opinion, I challenge you to this: sit down and have a conversation with a Republican or conservative you know and have a conversation with them about your beliefs and theirs in genuine fashion. No fighting. No slurs or insults. No bias. Just simple, civil conversation. Respect must first come from understanding, and that is what I implore all parties here to do now in the wake of this event.

Chairman, College Republicans at the University of Minnesota