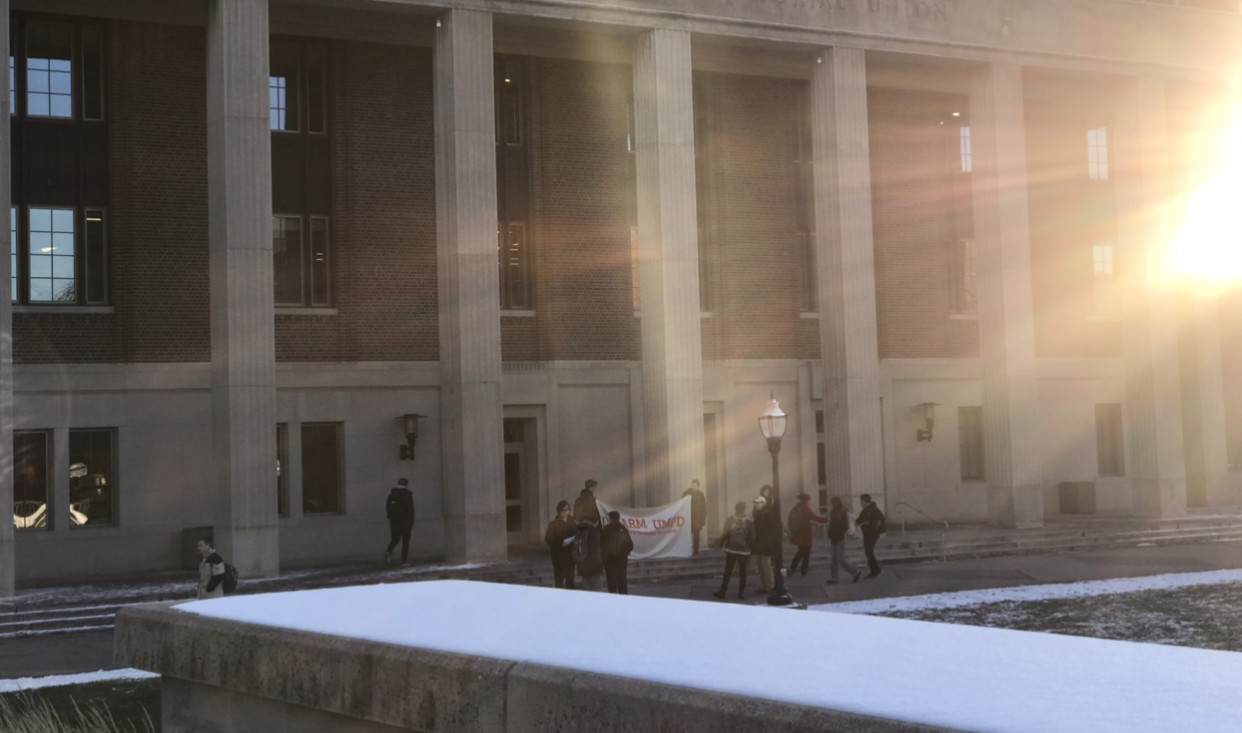 Students for a Democratic Society: disarm the police!

No, the title you just read is not clickbait, sadly.

Earlier this month, University of Minnesota’s Chapter of Students for a Democratic Society stood outside of Coffman Memorial Union, speaking to passerbyers and holding a sign that sported the message: “Disarm UMPD” simple, but not well researched – in fact, I was stunned by the backwards logic of this.

But nevertheless, it is not like this request was unexpected, this is right in line with what SDS has been doing since the 1960’s, except, what they did in the 1960’s was out of necessity for reform and equality – this, well, I really do not understand this one. Let us work out the logic of this together. When was the last time a UMPD exercised their weapon either fatally or not fatally but caused injury?

As stated by Ellen Schneider, writer for The Minnesota Daily, “A UMPD officer has shot a gun only once in the last decade. And no, it wasn’t shot at a student, or person at all — it was shot in 2012 to put a dying raccoon out of its misery on the St. Paul campus…This is not only incredulous, but is also completely out of touch with reality.”

Schneider is correct. This request is out of touch. As a female, as much as I would love to state I feel safe on campus, I don’t – right in line with what Schneider wrote in 2018. Living in Stadium Village, I am on the outskirts of campus, and don’t fall into UMPD jurisdictions – and what’s going on in my neighborhood? Well, most fall nights in September were riddled with gunshots around 2-3 a.m., and in June, in fact, one UMN student was shot on the corner of 27th street and Essex, nearly on my doorstep.

A UMPD officer has shot a gun only once in the last decade. And no, it wasn’t shot at a student, or person at all — it was shot in 2012 to put a dying raccoon out of its misery on the St. Paul campus.”

Although the victim made it out fine – I must ask, why is this crime happening outside of campus boundaries? It is because UMPD has us nearly on lockdown. I have spoken about the egregious system that is SafeU and how its broad profiling does nothing to protect us, but when easily 20,000+ students are aware of some occurence to some level, police interception does carry a higher standard.

Now, back to the argument at hand – allow me to enlighten SDS on some occurrences that have had me feeling very unsafe in the past three years of my education here. My freshman year I was jumped outside of Sally’s, and police stopped that. My sophomore year, police helped stop a theft of my bike. Sophomore year again, I had a group of men approach me while I sat in my car, on campus, and they pulled a strap, again, police helped track that down – unfortunately, the same group of men, had the chance to sexually assault some girls before they were taken into custody. And this year alone, I have had my bike stolen, and then have gotten to listen to the oh-so-blissful music of gunshots at night.

Let me remind you: these are not police gunshots.

The police on campus do not racially target either – in fact, University policy is banning them from doing so, which in the event of a SafeU notification, as I have previously stated, helps nobody and protects nobody.

Another point I wanted to reiterate, as Schneider also noted, UMPD does not only carry lethal weapons – they are also armed with tasers. Now in the event that police are faced with an escalated and dangerous situation, many result to drawing their lethal weapon, as cross-drawing a taser is more time consuming – that, is to be questioned, but again, it has not happened on our campus.

Of the two most recent, lethal police-on-student shootings to take place (University of Chicago and Georgia Tech), Schneider noted, “In Chicago, the student who was injured charged at officers with a metal pipe that he had been using to smash windows when police arrived. In Georgia, the student who was killed by police reportedly yelled “shoot me” while wielding a knife. It makes sense to question force used by police, but not in this context.”

I mean, I guess if you’re calling for the police to be disarmed, then you want anarchy? I don’t know if I drew any complete conclusions throughout this article other than this request by SDS is not only completely out of touch with reality, but plain stupid. This is not rooted in fact, it is rooted in emotion – it is time we start respecting the individuals that put their lives on the line for us, rather than worry about what they’re capable of. So with that, I beg many questions to SDS: have you had a conversation with an officer who has had to use lethal force and/or been in a potentially deadly situation, while they kept your environment safe? Have you considered the fact that the reason you can so freely protest them is partly due to the fact that you’re kept safe by them?

In places such as Detroit wherein some areas individuals have a 1/2 chance of being shot, would you still protest this?Maybe it is time you put your life on the line before drawing such a disrespectful, dishonorable, entitled, and frankly, sheltered opinion – it’s time we #backtheblue.

Let the UMPD Keep Their Guns

Earlier this month, the Minnesota Student Association (MSA) held their annual elections. Voting is done online, and the election allows University of ...

You know what is a wonderful idea? Identifying a suspect without identifying them. No, really, I am serious! Why would we want any indication of someo...

April 12, 2018. Students for a Democratic Society (SDS) had a protest outside of the University of Minnesota Parking and Transportation building. The ...