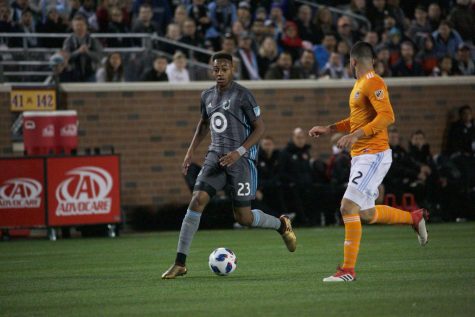 As the MLS season quickly approaches, the upstart Minnesota United are finalizing their roster in their preseason games, and there is quite the hype around the team Coach Adrian Heath is building.

The Loons have already played two games this preseason, a 2-2 draw against the New England Revolution and a 4-2 win against the Portland Timbers. The biggest story coming out of the preparatory games is the impact made by the new names in the United camp.

Out of the six goals scored so far by the Loons, all have been scored by new signees Luis Amarilla (3), Thomás Chacón (1) and Raheem Edwards (2). Amarilla has been particularly impressive, scoring in both of the games so far.  Amarilla, who is valued at $2.2 million, has arrived on loan from Argentinian club, Club Atlético Vélez Sarsfield, however there is an option to buy the contract at the end of the loan deal.  He will need to continue this form into the regular season if he wants to win the hearts of the fans who lost their talisman Darwin Quintero this winter.

However the big money signing of this group is Chacón, who is now the most valuable player on the roster ($2.5m) and has a lot on his plate, becoming the second designated player on the roster after Jan Gregus. Minnesota United spent $3.96 million last August to sign the 19-year-old Uruguayan midfielder.  Signed from Danubio FC in Uruguay, Chacón does not have much first team experience but has shown some very promising flashes in the two preseason games.  He arguably has the most talent on the roster and is an incredibly exciting prospect to have. If all goes to plan, United fans will be praising the Uruguayan endlessly.

Perhaps the most overlooked newcomer, Raheem Edwards, has made a name for himself early, scoring a brace in the 4-2 win over the Portland Timbers. Edwards was acquired in a trade that sent defender Wyatt Omsberg to the Chicago Fire in early February. A natural left-winger, Edwards has pace and skill on the ball, along with 12 goal contributions over 53 games in the MLS in his career. Edwards is an interesting fit into this Minnesota United team and should add plenty of pace into the attack.

As for the rest of the new players, the likes of Tyler Miller (LAFC), Aaron Schoenfeld (M. Tel Aviv), José Aja (Orlando City SC) and Marlon Hairston (Houston Dynamo) all have been brought in to potentially break into the starting 11. As well, the Loons have added to the squad through the 202o Super Draft with young talents Noah Billingsley and Andrew Booth to replace the depth lost when others departed the club in the winter.

The Loons have lost quite a bit since they’ve last played in the MLS.  Players such as Angelo Rodriguez, Vito Mannone, Miguel Ibarra, Abu Danladi, Darwin Quintero, Bobby Shuttleworth and Rasmus Schüller among others have all departed the club in the offseason. It’s always a tough task to replace this many players, especially ones who have given so much to the club like Quintero, Ibarra and Mannone. However with the additions that Minnesota United have already brought in, it’s hard to count out this team’s chances in the MLS.

Not only that, but the squad has retained many of its key players such as Ike Opara, Jan Gregus, Romain Métanire, captain Michael Boxall, Hassani Dotson and U.S international Chase Gasper. The squad looks set for another MLS Cup run, one that ended in the first round last time around at the hands of the LA Galaxy and Zlatan Ibrahimovic.  Minnesota United will be looking to improve even more in their fourth season in the MLS, and to possibly make a deep run into the MLS Cup.