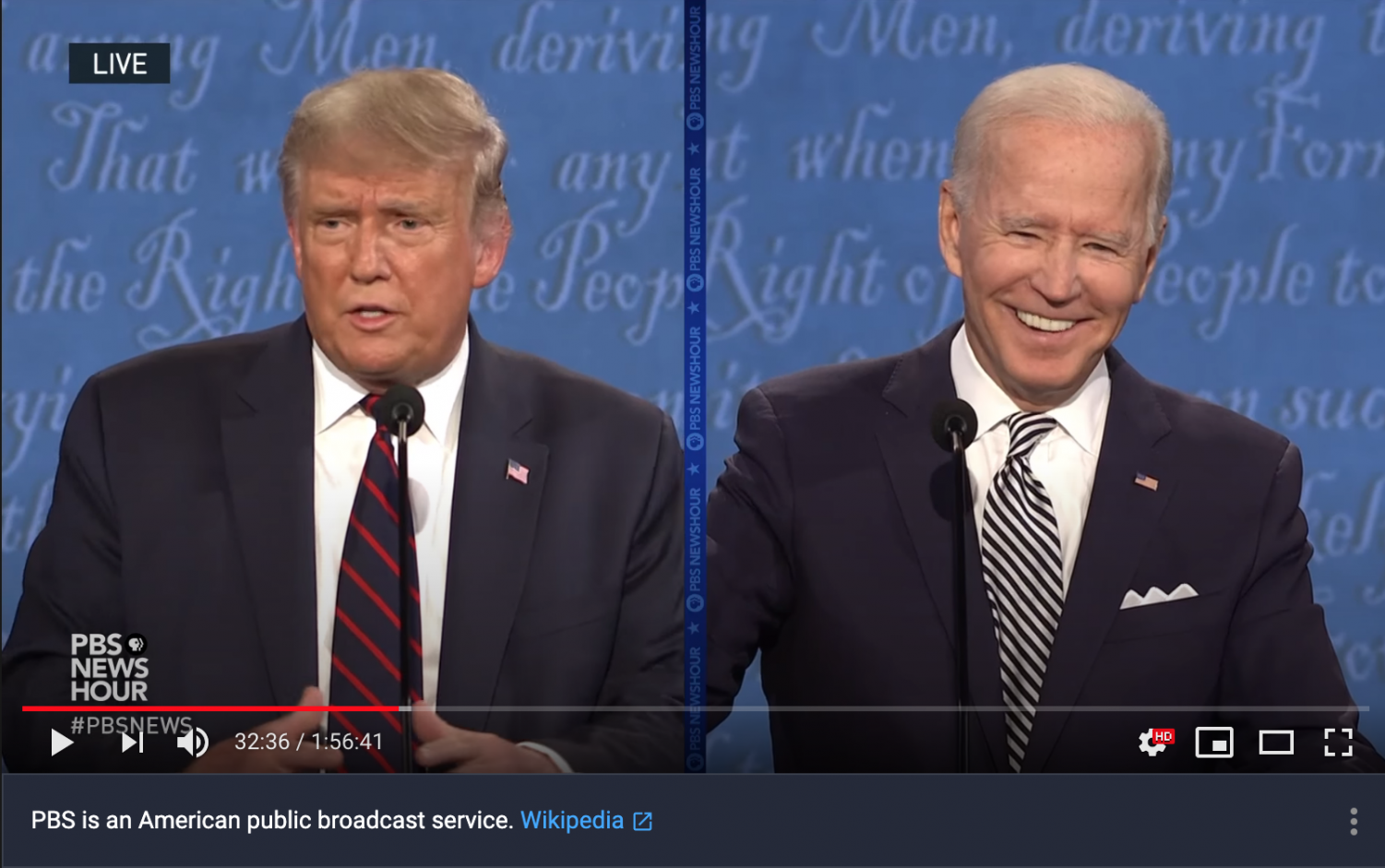 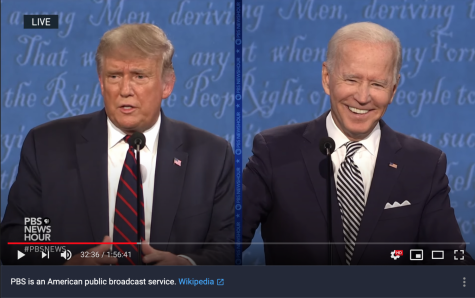 On Tuesday, Sept. 29 at 8:00 p.m. CST the first, and most consequential, presidential debate aired – with the pandemic, current race tension, and the media surrounding President Donald Trump, the debate was highly anticipated.

Just over twenty minutes in, former Vice President Joe Biden said, “Would you shut up man…keep yapping man.” Is that what you expected of this first debate? I certainly did not, but I digress. I will say however – I was expecting more out of President Trump, but about the only segment he held it together in was the first five minutes, if even. Same goes for Biden – with the stuttering over his words, constant sarcastic laughing and repeated slurs towards Trump, he did no better.

Segment One and Two: The Trump and Biden Records, The Supreme Court

The debate began on a slower note, highlighting President Trump’s intentions to replace the late Justice Ginsburg with Amy Coney Barrett, an academic out of Notre Dame. Although Biden dissented to this, there was no heat until Moderator Chris Wallace mentioned a filibuster, in which Biden provided no answer, and Trump railed him into the ground with interruptions. As Biden stuttered, “That was really a pr-pr-productive segment, wasn’t it?” But it got worse.

Wallace led into the second subject on COVID-19 and stated, “[COVID-19] is an awfully serious subject so, let’s try to be serious about it.” I found it entertaining Wallace’s attempt to keep himself serious amongst all of the sighing he was doing between stating this, but nonetheless – how could he? Wallace bid Biden two minutes uninterrupted on the subject to which Biden stated, “Good luck.”

That was really a pr-pr-productive segment, wasn’t it?”

Biden criticized Trump on his initial response to the virus – Trump did not want to ring the alarm bells with the American people, but Biden believes the White House should be utilizing the money it has to help the people as much as it can, but Trump only held out for roughly a minute before he interjected with, “Wrong.” Trump continued on to state that his actions to close down the country were life-saving, that the 200,000 deaths could have been millions had he not done that. Moreover he noted that no country gives the U.S. straight numbers on how many deaths they had, and called out Biden for claiming he was xenophobic for closing the country early on.

Despite Biden’s continuous interjections, Trump was very well-spoken when it came to his turn. Speaking on Dr. Fauci’s recommendations, and how his early actions to get PPE as well as working on vaccines and therapeutics has slowed some progression. Trump also added his only flaw is his relationship with the media, to which he said, “I don’t care.”

Biden made a flawed attempt to defend against this, but Trump caught him off-guard with the Obama administration’s botched response to H1N1. Biden attempted to justify that their response was better because there were only 14,000 deaths, however he neglected the fundamental differences between the two diseases.

The attempt continued with Biden mentioning people injecting themselves with bleach, or how Trump cannot be trusted on his timeline for the vaccine. Any person would understand that Trump and his administration were (and still are) in an uncertain time, therefore no answers are fully correct – Trump’s flaw in this equation is that he does not stop talking. Biden continued to show detestment for Trump’s response on masks, but fought with colloquial evidence.

Trump began with stating his usual: we’ve built the greatest economy. However, he decided to go into the closures and how they are simply not fair – individuals know to social distance, wear masks, and wash their hands – but what you can’t do is force them to without martial law. It is simple, our flaw is that we are a country built on freedom, whether it is right or wrong, people inherently have the choice, sadly. Trump also noted that some states are staying “closed” until the election is over, which denotes that it is a political decision, one that may only hurt the Democrats.

From there, Biden continued to smear Trump, all bringing it back to his tax returns. Trump noted that his past history in private business drove him to go through tax law – and by the way, if you didn’t already know, income tax is a fairly grey area. I am not disagreeing that it is awful on his account if he did not fully pay them, but it is worth noting.

Biden rebutted with the need for repealing Trump’s tax cuts so that more tax money could go to the American people. He followed up with, “You are the worst president America has ever had, c’mon.”

You are the worst president America has ever had, c’mon.”

Wallace interjected by streamlining Biden’s economic plan into what he considered “Big Government,” proposing an over $4 trillion tax dollar surplus in the next decade on individuals making over $400,00 to corporations, etc. Trump argues that this will hurt the economy, coming out of the recession. Wallace noted that prior to COVID-19 the U.S. had record low unemployment, but Biden continued to dissent.

“It’s hard to get any word in with this clown,” said Biden.

I noticed throughout this segment when Biden felt cornered he switched his gaze to the camera, trying to get his point across to the viewer. In my opinion, it was slightly uncomfortable.

At the end of this segment, Wallace had to raise his voice to get through to the two, a reflection on the maturity of them.

Segment Five: Race and Violence in our Cities

Three rich white men debating race, a joke in my opinion. Biden got first say on this segment, highlighting that we need more equity, and how Trump’s initial response to George Floyd’s killing was horrific in how he utilized the military and tear gas to approach a church in Washington D.C.

Trump rebutted with Biden’s 1994 comment on African Americans being “super predators” and how he has let individuals out of jail. He continued to speak on law and order in Democrat-run cities, generalizing that the American people allegedly want it; do they?

“There is a systemic injustice,” continued Biden. Biden noted that not every person in law enforcement is bad, but when there is one – they must be held accountable. Amen!

The segment then continued on to law and order, as well as protests. Biden recommends law force having more assistance, whereas Trump recommends a cut. On the topic of protests, Biden asserted that cities can handle protests if the administration steps out of the way, and as you may have guessed, Trump was not for this. Trump argued that sending in the National Guard would resolve it.

“Proud Boys, stand back and stand by,” said Trump. I don’t want to take this out of context, as it was said in the middle of an argument – but what on earth did he mean?

For some reason the debate moved on into climate change, seperate from what the segment was supposed to be – but your assumptions of the opinions of each candidate are likely correct. Nothing stated here was unexpected from either end, other than Biden drawing a line between his climate plan and Alexandria Ocasio-Cortez’s.

Segment Six: Integrity of the Election

The main focus of this segment was to define how each candidate will assure American voters that their vote actually mattered. Biden immediately redirected people to www.iwillvote.com, which is misleading because it is not neutral – it is paid for by the Democratic National Committee (DNC). Biden assured that absentee ballots will not be a source of tampering, taking a slight stab at Trump for his allegations against the U.S. Postal System. Biden looked straight into the camera assuring voters had the power to make Trump leave office.

As far as the ballots are concerned, it is a disaster,”

“As far as the ballots are concerned, it is a disaster,” noted Trump.

The discussion continued to a debate on whether or not mail-in votes will perhaps be fraudulent, considering that not all votes may be counted by the actual election conclusion, but each side stayed headstrong in their opinions, as expected.

In terms of declaring victory before the ballots are independently verified, Biden stated he will support it either way and if he wins, he will be a president for both the Democrats and Republicans – a statement coming from a place of comfort and reassurance. Trump, on the other hand, wanted to drive home his want for an honest ballot count, but the debate concluded.

This article was written on the basis of what I personally observed as a journalist. In conclusion, I recommend you watch it for yourself, and draw your own opinions. 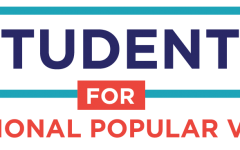 The 2018 Midterm Elections were packed with drama and controversy. However, before the elections, it seemed to everyone as if Americans f... 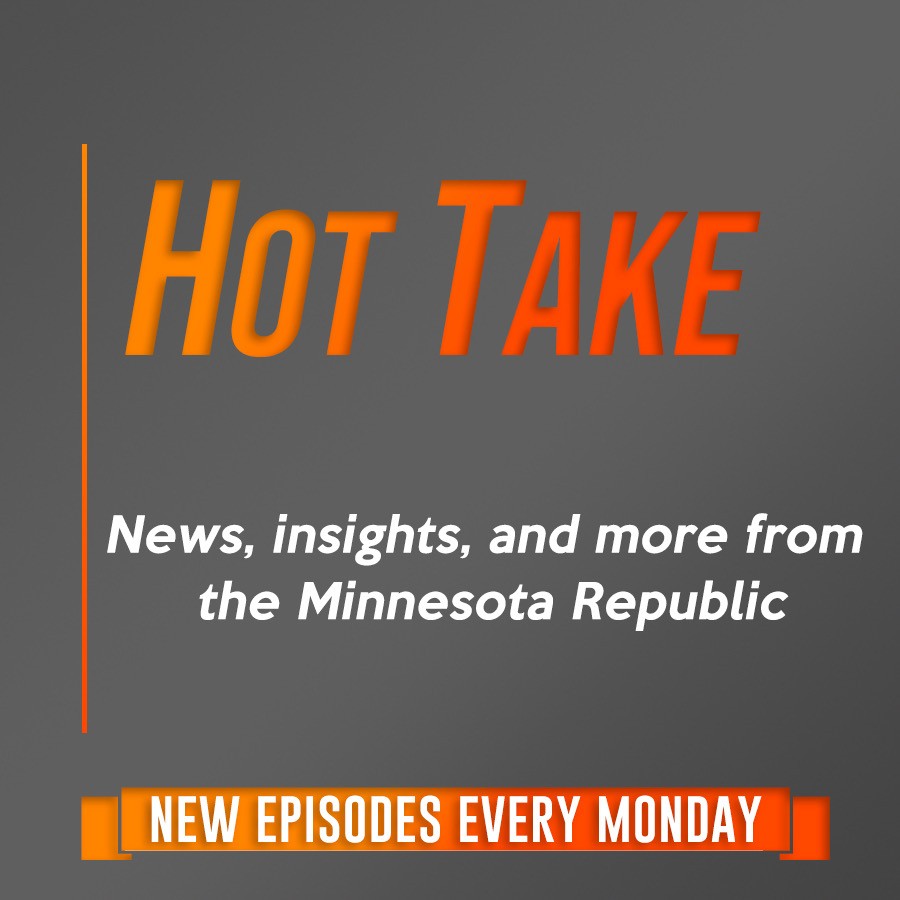 The Surprise of Trump’s Election