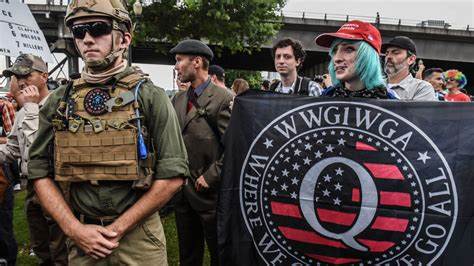 QAnon: Digital “Patriots for Truth, Justice, and the American Way”

The far-right conspiracy group QAnon has made attempts to, as they describe it, drain the swamp and expose the allegedly rampant pedophilia within the U.S Government. QAnon claims to be a sentinel of the truth in their battle against fake news directed at President Trump. On the surface, their claims seem strange, but as you dive deeper things only get crazier. QAnon has infiltrated social media; exposing the evils of mass media and elite government officials while sporting their hashtags #Pedowood and #WWG1WGA. The group has attempted to expose Barack Obama, Hillary Clinton, and George Soros’ “plan” to halt Trump’s day of reckoning and exposure “The Storm”.

QAnon’s entire claim is that these allegedly sex-trafficking pedophiles control much of the government and Hollywood; covering up scandals like Jeffery Epstein’s. They rationalize this by saying that Trump was elected to ultimately uncover these atrocious acts performed within the world’s elites, which is their reasoning for the media scrutiny that Trumps has received. QAnon’s message was disseminated through Reddit and YouTubers like Alex Jones from InfoWars. I must mention that I am by no means a supporter of this group.

QAnon has had many failed past predictions; “The Storm” was supposed to happen back in 2017, when CEO’s of mass media companies like Facebook were supposed to have resigned en masse.

QAnon claims to be a sentinel of the truth in their battle against fake news directed at President Trump.”

Supporters of QAnon can be seen wearing a red-lettered Q on their various uniforms and sporting their widely used hashtag #WWG1GA: Where We Go One, We Go All. Twitter banned many top accounts promoting the radical ideology and even changed their algorithms to limit and slow its spread.

Where it gets a little bit creepy comes from something my good buddy Ty told me.

Ty has a friend. His friend, ironically, added the trademarked acronym to her bio on Instagram. Within about 5 minutes her account was disabled and removed. It’s things like this that give groups like QAnon traction. People do not like being censored, and it makes people in QAnon feel like they’re on to something when big media-the kinds of people they’re after- silence their ideology. This has happened to many people trying to spread these theories.

This ideology has already been around for a few years, but there are real-life implications of this ideology on the election and who will hold government power. QAnon has almost become a political party of its own. This year, there were several advocates of the ideology running for government positions. Something that started in the corners of the internet and social media has poked its head into politics and legislation. While none of them have any chance of winning their position within the government, it will still be interesting to see if this ideology will end up swaying policy in the future.

In the months to come following the election, we may start to see QAnon supporters emerge as more public activists. Maybe we will see a right-wing activism group to counteract ANTIFA. The results of the election could cause another radical group to rear its ugly head, but this time that ugliness will come from the right rather than the left.