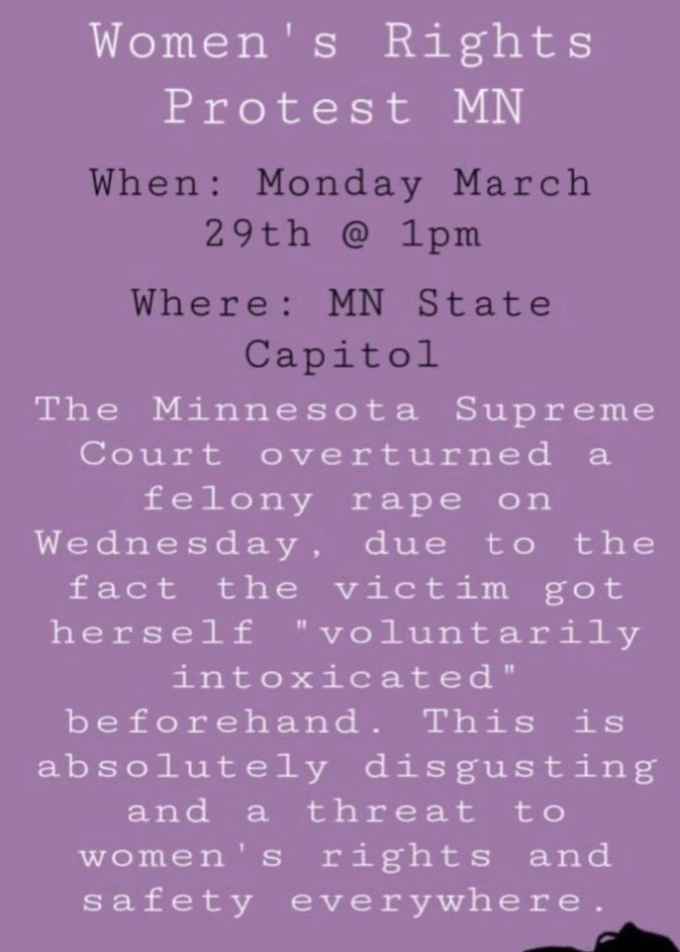 A person who is sexually assaulted while intoxicated does not fit the designation for a felony charge if he or she consumed the alcohol or drugs voluntarily, the Minnesota Supreme Court said in a ruling released On Wednesday Mar. 24 and the ruling has the public outraged. The court overturned a Maple Grove man’s felony conviction of sexual assault because the victim got herself drunk before the incident.

Francois Khalil, then 20, picked up an intoxicated woman outside a Dinkytown bar in 2017, and took her back to his North Minneapolis home where he raped her after she passed out on a couch. According to court records, the woman was refused entry to a bar in Dinkytown because she was too intoxicated, before meeting up with Khalil. In 2019, the woman testified, according to court records, and a Hennepin County jury then convicted him of third-degree sexual assault. Khalil’s attorney argued the felony charge does not apply because the statue only pertains to those who had been forcefully intoxicated.

According to Justice Paul Thissen the prosecution’s interpretation, “unreasonably strains and stretches the plain text of the statute,” because in order for the case to meet the definition of mentally incapacitated, the drugs or alcohol must be administered by the attacker, without the express consent of the victim.

There is no word on whether or not the court will revisit the case – but the precedent that it sets is dangerous, and social media was very quick to spot it out. Democratic state Rep. Kelly Moller said it shows the urgent need to update the state’s criminal sexual conduct statute, including by closing what she calls the intoxication loophole. She has introduced a bill to amend the statute.

Victims who are intoxicated to the degree that they are unable to give consent are entitled to justice.”

Moller said, “Victims who are intoxicated to the degree that they are unable to give consent are entitled to justice…Minnesotans who experience unthinkable trauma deserve to see the Legislature take action on this immediately.”

According to CBS News, background in the opinion states that “nearly half of all women in the United States have been the victim of sexual violence in their lifetime – including an estimated 10 million women who have been raped while under the influence of alcohol or drugs.”

In a world where sexual assault is increasing towards women – especially following the recent events in Atlanta, where Asian women were targeted (dominantly sexualized) and killed, women from each political side are raising their voice, as recent events are showing a general ignorance towards the struggles that women face on a daily basis, the dangers, and the lack of protection that the legal system is providing.

One local Minneapolis resident and recent graduate of University of Minnesota wrote on her Instagram story, “Yeah, alright. So the state is teaching women not to drink. This is so fucked! Are you fucking serious? I get it, drink responsibly, be safe. But shit happens, we all get drunk! That does not excuse anyone from rape! I am so mad/sad right now.”

“So because a female decides to drink that means she chooses to be sexually assaulted?” Another wrote.

In addition to people bringing the topic up all across the board on Instagram live and Instagram stories, posts about dressing safely began to circulate as well. A user by the name of @gymmtips wrote, “Have you ever asked yourself how you needed to dress up in the morning? No not how you wanted to dress up. I have. Do you know why? Because we live in a world where 100% of the women have been a victim of street harassment. And you know the worst part? We blame women for it. We tell them they should not have provoked him. When all they are guilty of was wearing an outfit they liked. The outfit is not even the problem. I have been harassed wearing a skirt. I have also been harassed wearing a huge sweater and a tracksuit. We don’t need a change, men need to behave.”

Posts like this have now amounted to a protest scheduled for Mar. 29 at 1 p.m. – the organizer of the event is currently unknown, but instructions are to meet at the Minnesota State Capitol, wear masks, socially distance, and march for women’s rights.