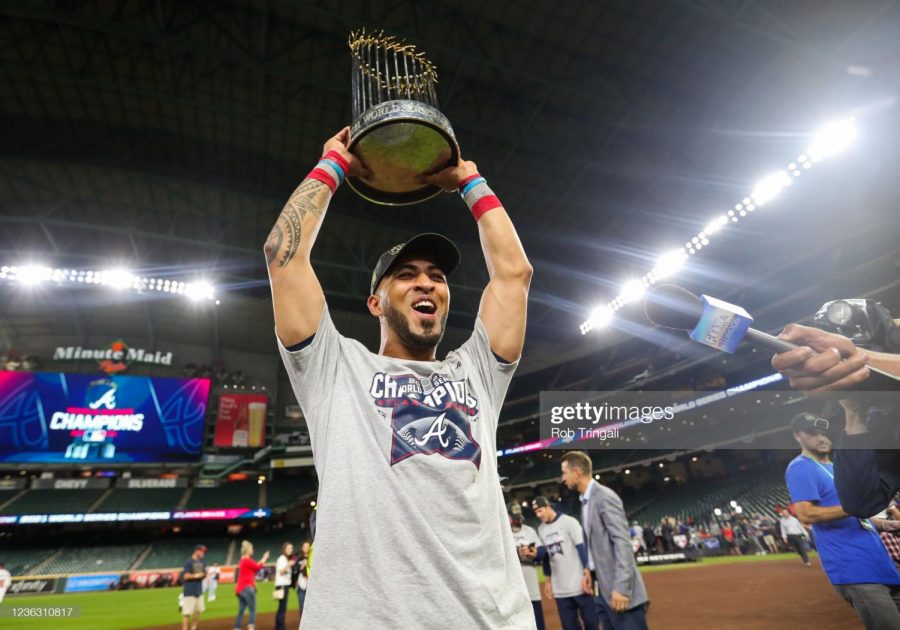 Baseball is a sport that is known, more than any other, for being superstitious. For the Atlanta Braves, the challenge of ending Atlanta’s 26-year curse was an afterthought considering the challenges they faced during the postseason. Their saving grace may have just been, opposite to Atlanta teams of the past, that they were not expected to win.

Although the Braves won the National League (NL) East Division, they were far from favorites to win it all. They finished their season with 88 wins. This was only the fifth highest total in the NL. The Giants, Dodgers, Brewers, and Cardinals all had better records in the regular season. Even without a top record, their division title allowed them to avoid the single-elimination Wild Card round and advance straight to the NL Divisional Series. Their first-round opponent was the Milwaukee Brewers, a team known for their elite pitching. Luckily for the Braves, great pitching is not enough to win a series. The Braves pitchers silenced the Brewers hitters and wrapped the series up in four games.

Their next opponent did not have obvious weaknesses like the Brewers did. The 106-win Los Angeles Dodgers had a stacked team, top to bottom, and were the favorites to win it all. To the surprise of many, the Braves won both of the first two games in their home stadium. The Dodgers were able to bring the series to 3-2 after winning at home in game five, but the Braves again prevailed at home to win the series in six games and advance to the World Series. The American League Champions are known to most as cheaters due to their sign-stealing scandal after the 2017 season. This does not change the fact that the Astros have been a powerful force and made the World Series in three of the last five years. The Braves kept their heads down and silenced doubters once again by jumping out to a 3-1 lead in the series. If there was a time for the city of Atlanta to worry about their tradition of heartbreak, this was it. Especially after giving away game five in their home stadium. For the first time in this year’s postseason, the Braves had something to lose. They did it, though. They shutout the Astros 7-0 to win game six and their first championship in 26 years.

This remarkable run did not happen by accident. How did it happen? It was the result of a complete team effort, from the front office to back of the bullpen. After winning the 2019 NL Most Valuable Player award, many thought Freddie Freeman would be the biggest contributor to the Braves success. Based off his age 32 season, his eleventh with the Braves, these people were correct. Not only is he a selfless leader and a model of loyalty, but he also hit for a .300 average and 31 home runs in the regular season. His production continued throughout the postseason. Even with these facts, Freeman is not the face of the Atlanta Braves organization. That title belongs to Ronald Acuña jr. Acuña is a five-tool player and has the potential to break any game wide open.

However, this was not a factor in the postseason. In July, Acuña suffered a heartbreaking torn ACL. This stripped hope from many Braves fans. Without Acuña, the Braves clearly did not have the pieces to compete. This is where the front office comes into play. The Braves traded for Adam Duvall, Joc Pederson, Eddie Rosario, and Jorge Soler. All four of these players gave huge contributions to the team all the way throughout the playoffs. Especially Rosario and Soler. Rosario did this by being the first person in NL Championship Series history to have two four-hit games in one series. Soler shined, earning himself World Series MVP, by hitting multiple moonshot homeruns to clinch the title for Atlanta. Apart from the new guys, young star Austin Riley came into his own and had a dominant season. All of this, combined with great pitching, led by Max Fried and A.J. Minter, gave the Atlanta Braves everything they needed to triumph when no one thought they could

Although this championship makes Minnesota the undisputed saddest sports market in America, the Braves and the people of Atlanta deserved this title and will celebrate for some time to come.