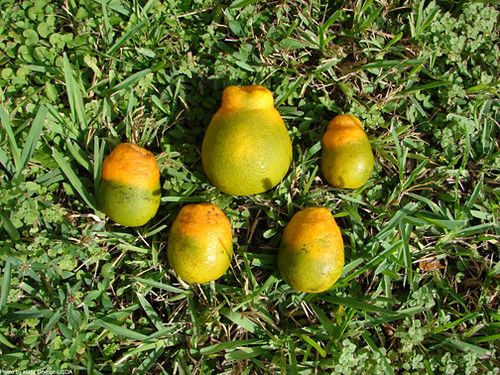 The orange juice shortage is unlikely to go away anytime soon. According to CNN Money, the combination of citrus disease and bad weather has been hard hitting on the supply of oranges. In fact, the combination of these two things have hit orange crops so hard that the orange crop yield is going to be the smallest the United States has experienced since World War II.

The disease is found in crops in many southern parts of the United States of America as well as in the U.S. Virgin Islands and Puerto Rico. When citrus crops contract this disease there is a wide range of side effects. Oftentimes the fruit stays green even if it is ripe and may also turn out lopsided. The crops also have a noticeable change in appearance, having shoots that are yellow and an asymmetrical blotchy mottling of leaves.

Even more bad news is that the demand for orange juice has steadily been on the rise since the pandemic hit. The high demand and extremely low supply of oranges has sparked a sharp rise in orange juice prices. CBS News says that the price of orange juice rose about 14 percent in 2021. It is expected that it will continue to rise even more in 2022. During the pandemic, the frozen orange juice futures price rose by over 50 percent. As demand continues to rise and the supply continues to diminish, the rising prices of orange juice are unlikely to stop anytime in the near future.

Over the past year, many restaurants have either taken chicken wings off of their menus or have greatly increased the price of them. Many grocery stores have had a much smaller supply of chicken wings available for purchase and have raised the prices.

The reason for the chicken wing shortage stems from supply chain issues. Business Insider claims that the winter storm that struck Texas in early 2021 is in part to blame. This unprecedented winter storm killed off many chickens. Replenishing the supply of chickens lost in the storm is not something that can be done overnight.

While to someone living in Minnesota these might not seem like very cold temperatures, Houston is very unaccustomed to this degree of cold weather. For reference, the average low temperature in Houston is 50 degrees Fahrenheit during the month of February. Because Texas was blindsided by this sudden cold weather, the unpreparedness led to many chickens dying from the cold.

Another reason for the wing shortage is that much like orange juice, the demand for chicken has soared. CBS News believes that the pandemic is responsible for causing people to turn to comfort food. One extremely popular comfort food is chicken wings. Pairing the high demand for wings with a shortage of chicken leads to spikes in prices.

On a more positive note, research is being done right at this very moment to help citrus crops fight off citrus disease, and the supply of chickens will continue to replenish each and every day barring the unlikely event of another major Texas winter storm. Prices will likely continue to remain high for some time for both orange juice and wings as supplies continue to dwindle and demand remains high.

Once the chicken supply has been restored, which will hopefully be before too long, wings will become much more accessible. For orange juice, new research is done everyday to fight against Citrus Greening and there is hope that next years crop yield will be much larger than this years.