As with all “innovations” in the ever-changing world of multimedia, there’s the promise of an experience like you’ve never seen before. While 4K Ultra HD (UHD) Blu-rays won’t completely change the way you watch films, the video and audio found on these releases completely outclasses what’s available on standard Blu-ray. These discs offer a higher resolution, greater color depth, and a higher bitrate. That translates to a better picture if you have the kit to support it.

Since 4K TVs are both readily available and affordable and current video game consoles like the PlayStation 5 support the format, there’s no better time to start your collection. The following 5 releases represent the best of what 4K UHD Blu-rays have to offer.

This classic thriller-mystery-romance from Alfred Hitchcock shows stars Jimmie Stewart as a retired San Francisco detective who investigates the wife of his good friend. He slowly begins to obsess over her and uncover the motives behind her strange actions. Vertigo is a very visually creative film with a pleasing use of color and great editing that isn’t afraid to rest on a shot. Consequently, releasing this film on 4K was a no-brainer, and the disc certainly does not disappoint. The colors pop significantly more than on any prior Blu-ray release and the fidelity is incredible. For a movie that originally came out in 1958, the fact it can look this good in 2022 is a miracle.

The improvements on 4K can best be seen with older movies as they may have had poor releases in the past or a new 4K disc gives the publisher a good excuse to rescan the original film elements. 2001 is no exception to this. The cerebral and thoroughly engaging story of supercomputer HAL 9000 and humanity’s investigation of the mysterious and all-encompassing Monoliths benefits greatly from the increased color depth and fidelity. Such a visual film demands top-quality presentation, and the superior image make the still-impressive special effects really pop.

While this adaptation of an Agatha Christie murder mystery set aboard the Orient Express train might not win any awards for originality or excellence in storytelling, the 4K represents the best release of a new film currently available. The level of detail visible on the actors’ faces, their costumes, and the luscious sets is astounding when compared to a streaming copy or Blu-ray release of the film. While the increased fidelity does nothing to help the very obvious and poor-quality CGI effects, that does not mar the rest of the performance at all. Given the film was shot on high-quality 65mm film stock and finished at a 4K resolution, the excellence of this release perhaps shouldn’t be a surprise.

Somehow even more impressive than Vertigo, The Ten Commandments delivers impossibly high-quality video and audio given the age of the source. Charlton Heston plays Moses on his quest to liberate the Hebrew people from slavery and persecution in this classic Hollywood epic. The scope and scale of the sets and set pieces benefit from the increased quality and clarity offered by 4K UHD. While some visual effects shots where the filmmakers composited two film elements on top of each other may have increased grain and noisiness, that is simply a byproduct of how the film was made. The best way to experience this masterpiece, as it makes all prior home releases seem low-quality in comparison. 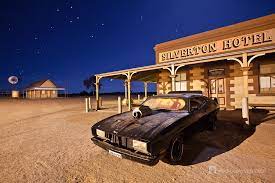 While not quite as old as some of the films on this list, the 4K release of Mad Max 2 still manages to impress as the definitive home version of a great film. While perhaps the plot and characters are a bit simple, that doesn’t really matter as the focus is the action and visuals. Thankfully, that’s where the increased resolution and superior color accuracy really helps. This 4K release is one of those where you sit back and think “wow, when was this movie released?” The outstanding restoration really makes it look as good as new. This release is the perfect showcase of what 4K brings to the table and comes highly recommended.

The outstanding restoration really makes it look as good as new”